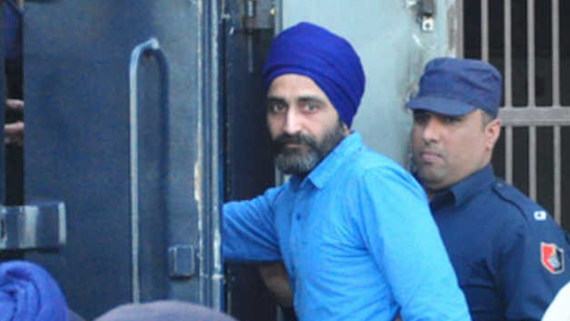 Bhai Jagtar Singh Tara was arrested and extradited from Thailand in January 2015 and since the trail has been underway in this case. During the trail Bhai Jagtar Singh Tara had openly and fearlessly admitted that he was involved in the execution of Beant Singh and holds no regret for his acts as they did it in order to save the future Sikh generations from the tyrannical onslaught of Beant Singh.

However, he expressed his remorse over the death of sixteen other innocents, who lost their live due to the intensity  of the that bomb blast.

Advocate Simranjit Singh defense counsel of Bhai Jagtar Singh Tara while interacting with the media present outside the Burail Jail complex said that “after pronouncement of the sentence Bhai Jagtar Singh Tara is in high spirits (chardikala) and is fully satisfied with the sentencing.” “He does not wish to appeal further against the ruling handed over to him by the Special CBI court”, he add,

“The CBI was asking for capital punishment for him but it was argued with the judges that, as per Geneva convention Bhai Jagtar Singh Tara is a prisoner of war (PoW) as he had waged a war against the Indian State to avenge the atrocities committed by the state upon the Sikhs, so a prisoner of war cannot be given death penalty.”