NewDelhi: As reported by the media the Indian Government has decided endorse the position and to stand by the Army personnels who used Kashmiri youth as a ‘human shield’ by tying his onto the fender of the jeep before parading him for 20 kms.

Media reports indicates that in its fact finding report the Army has maintained that ” the commanding officer took the decision reluctantly and as the last resort after he realised that his unit had to pass through streets crowded with a mob of stone-pelters who had also taken positions on surrounding rooftops.” 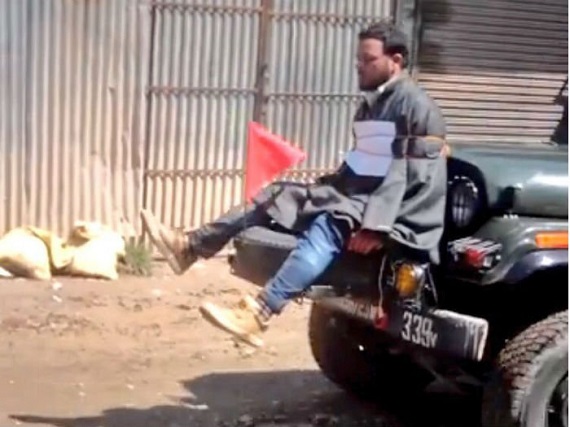 “The trapped personnel included about a dozen local J&K employees, about 9-10 ITBP jawans, a couple of constables from J&K police and a bus driver.”

Whereas, the victim youth named Farooq Ahemad Dhar in his statement to the media stated that he was detained by the army unit on the day of incident (9th April), when he was on his way to his relative’s funeral & then was beaten by sticks and guns by the personnels. He further stated that he was then tied to the jeep’s bumper and driven around nine villages, where local people were astonished at the sight of him.

“When they say me they were both afraid and angry.” I say people breaking into tears on seeing me, he added.