Chandigarh: Indian TV anchor and journalist Jagriti Shukla has once against expressed his genocidal impulse. The controversial anchor had expressed such an impulse earlier also by openly advocating persecution of minorities, including the Sikhs and Muslims.

While sharing a tweet from Mirwaiz Umar Farooq showing images of civilians with pellet gun injuries Jagriti Shukla said:  “WOW that’s so cool :) :) :) Would have preferred real bullets instead of pellets; results would have been much better“. 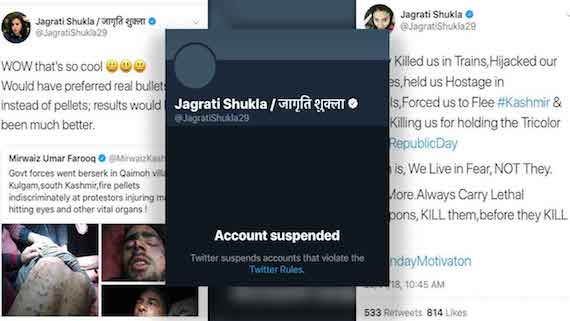 A mix of related screenshots used for representational purpose.

Whereas the Twitter has acted against Jagriti Shukla, the Lok Sabha TV- an Indian government owned TV channel that has employed Jagriti Shukla has not taken any action against her yet.

According to The Economic Times: a Lok Sabha TV official said service rules of its employees don’t apply to their social media behaviour and the absence of a criminal complaint also makes it difficult to remove employees who fault on social media. The channel is operated by Lok Sabha Secretariat under the patronage of speaker Sumitra Mahajan. It’s owned by Parliament of India.

Notably she was employed in Lok Sabha TV after she had openly advocated persecution of minorities and justified the 1984 Sikh genocide.

A former journalist with Zee News, Jagriti Shukla had first gained attention on the microblogging site after she used expletives to justify the gruesome murder of journalist Gauri Lankesh in Bengaluru last year. Reacting to her murder, Shukla had written, “So, Commy Gauri Lankesh has been murdered mercilessly. Your deeds always come back to haunt you, they say. Amen.”

So, Commy Gauri Lankesh has been murdered mercilessly. Your deeds always come back to haunt you, they say. Amen.#Bengaluru#GauriLankesh

Her another tweet on Lankesh’s murder had said, “Those who blv in bloody Revolution now mourning fate of Gauri Lankesh. How does it feel to be on the receiving end? (sic)

Those who blv in bloody Revolution now mourning fate of Gauri Lankesh. How does it feel to be on the receiving end?#Bengaluru#GauriLankesh

She also justified the 1984 genocide of Sikhs throughout India. She had written, “Sikhs deserved that. What do you expect when you breed hate? They killed Hindus for nothing. Although I don’t support genocide.”

Sikhs deserved that. What do u expect when you breed hate? They killed Hindus for nothing. Although I dont support genocide……

On another occasion, she had posted disparaging tweets mocking the social status of Dalits in India. Her tweet on Dalits had read, “u can say whateve u like. I say that u r a Dalit apologist. And a backward regressive moron. Now go clean toilets. Lol” (the tweet did not appear in Google search at the time of writing this news. But there are media reports available online which authenticates the fact that such a tweet was there.)

While calling for genocide in Kashmir, she had written, “If we need to commit genocide in Kashmir Valley to get rid of all these terrorists and their aides, then let’s do it.” (this tweet too did not appear in Google search at the time of writing this news).