November 6, 2015 | By Organization for Minorities of India (OFMI)

“The bill will advocate for a non-bailable warrant to be issued against the person found engaged in the act [of conversion], along with a ten-year jail [sentence],” says MP Tarun Vijay, who plans to table an anti-conversion law in the Upper House of Parliament this November. MP Yogi Adityanath, calling religious conversion “anti-national,” says he will introduce a similar bill in the Lower House. Such a law would make national legislation that already exists in six Indian states, which regulate religious conversion, usually by requiring people inform and seek approval from a local magistrate before converting.

“Passing a national anti-conversion law in India, or anywhere, is an attempt to democratically eliminate the most basic human rights of a democratic society,” remarks South Asian affairs analyst Pieter Friedrich. “What modern government presumes to regulate the thoughts of its citizens? India stands on the verge of criminalizing religious liberty.” 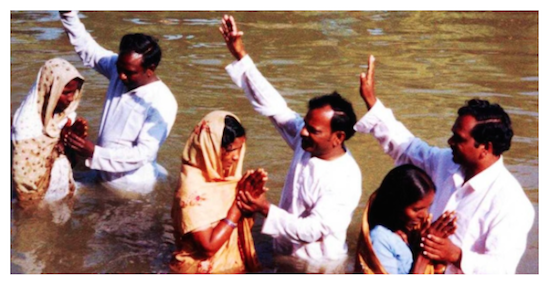 India’s proposed anti-conversion law comes on the heels of a new constitution in Nepal which includes provisions criminalizing the freedom of conversion. Declaring it “punishable by law” to engage in an act “to convert another person from one religion to another or any act or behavior to undermine or jeopardize the religion of each other,” the provision was only adopted after Indian BJP vice-president Bhagat Singh Koshiyari visited Nepal to call for a total legal ban on conversion.

Amit Shah, president of the BJP and a close advisor to Prime Minister Narendra Modi, last year called for a national anti-conversion in India, stating: “The government is ready to bring in a law against forced conversions…. If you feel the state government’s laws are not effective, there is need for an all-India law.”

Critics, however, point out that most of the laws define force as “including threat of divine displeasure or social excommunication” and that the laws have been used to falsely charge members of various religious communities who believe their faith requires acts of charity alongside calls to conversion.

Bhajan Singh, for instance, is concerned that the BJP is using anti-conversion laws to establish a Hindu state. “These laws are biased against India’s religious minorities,” warns Singh, who is founding director of US-based human rights group Organization for Minorities of India (OFMI). “They prevent people from leaving Hinduism by free choice but empower violent Hindu nationalists to convert minorities to Hinduism against their will. Ordering people to apply for permission from the government if they want to escape the harsh confines of the Hindu caste system is tyrannical.”

Adityanath, who is framing a bill for India’s Lower House of Parliament, has faced controversy in past years for leading mass conversions of religious minorities to Hinduism known as “Ghar Wapsi” — homecoming — ceremonies. Commenting on his bill, he said “An aggressive campaign is required for ghar wapsi of those Hindus, who had converted to other religions in the past.” According to Tehelka magazine, “In October 2005, he led a ‘purification drive’ in the district of Etah, converting 1,800 Christians to Hinduism. Earlier that year, he had converted 5,000 Dalit Christians in the same district.” In 2009, Adityanath declared: “I will not stop till I turn [Uttar Pradesh] and India into a Hindu rashtra (nation).”

Participants in past Ghar Wapsi programs allege that organizers blackmailed them into converting by threatening loss of government benefits such as food ration cards if they refused to abandon their minority faiths in favor of Hinduism.

“These laws are set up in such a way that the only real acceptable religion is Hinduism,” says Fr. Joshua Lickter, a Christian priest who is hoping to increase awareness about human rights in India. “The anti-conversion laws are written in such a way that even making a statement like, ‘God loves you and has a wonderful plan for your life,’ might be interpreted as using force to convert people because it implies you can’t do without God. If a person wants to convert because they fear life without God, this law would call that conversion insincere and illegal.”