The protest broke out on Oct. 12 after unknown perpetrators tore out over 100 pages of Guru Granth Sahib and scattered them in the streets in Bargari village in Punjab, India. Seeking police action, hundreds of Sikhs began protesting and demonstrations spread to the neighboring cities of Kotkapura, Moga, and Faridkot. On Wednesday morning, police opened fire on unarmed protesters at Behbal Kalan village, killing 45-year-old Kishan Singh and 20-year-old Gurjit Singh.

“We want peace, and we want these cycles of violence to end, but we don’t see how that can happen as long as peaceful dissent is routinely brutally suppressed,” remarks Mohan Ram Paul, an advisor to U.S.-based human rights group Organization for Minorities of India (OFMI). “The desecration of Guru Granth Sahib is a slap in the face to ideologies of equality and universal human dignity, and the massacre of unarmed protesters is an assault on the foundations of democratic society. Caste is still flourishing in India as long as the downtrodden are forbidden the right to demand redress of grievances from the ruling elite.” 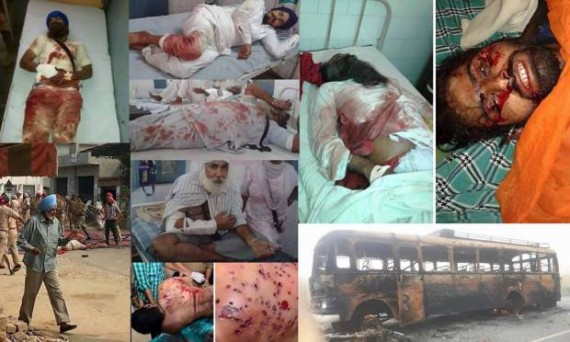 Pictures of dead and injured Sikhs from Oct. 14 violence

“These charges emanate from a government that arrests a hunger-striker and that admits to murdering human rights defenders like Jaswant Singh Khalra in retaliation for revealing secret police killings of tens of thousands of Sikhs,” comments OFMI Founding Director Bhajan Singh. “This is the same Punjab Government that, in 2011, selected Sumedh Saini to head the state police force despite pending charges against him for murdering people in custody and allegations that he led death squads against Sikhs in the 1990s. Saini, lest we forget, is also accused of murdering the father and uncle of Professor Davinderpal Singh Bhullar, who is facing a death sentence based on no more evidence than a retracted confession signed only with his thumb-print.”

The disruption in Punjab is expected to increase social tensions already aggravated by the fourth arrest, in September, of hunger-striker Surat Singh Khalsa, who has refused to eat since January in demand for release of Sikh political prisoners. Already, reports are emerging from Punjab that Sikh demonstrations have increased in response to the Oct. 14 killings and pictures show hundreds gathering at multiple cities throughout the state.

“I would say that the growing oppression in Punjab is freakishly similar to that surrounding the 1984 Sikh Genocide if it weren’t more accurately understood as an unbroken pattern of state suppression,” says South Asian affairs analyst Pieter Friedrich. “Violent attacks on freedom of expression, outlawing free assembly, and harassment of peaceful protesters are seen all throughout India. I recall earlier this year how police in Delhi invoked a colonial-era law banning assembly to disperse Christian demonstrators demanding action to stop violence against their community.”

Sikhs have a long history of tense relations with the Indian government. In the 1970s, tens of thousands courted arrest when the Sikh community staged the most sustained protests against then Prime Minister Indira Gandhi’s imposition of a two-year “Emergency” dictatorship. In June 1984, PM Gandhi ordered a military invasion of the Sikh Golden Temple in Punjab, causing the deaths of thousands of pilgrims, while in November 1984, her political party conducted a three-day genocide of Sikhs in Delhi, India’s capital, and surrounding regions.

This year, a hunger-strike by Surat Singh Khalsa, a U.S. permanent resident who fled India in the 1980s after being wounded in an unprovoked police firing on a peaceful demonstration outside the Punjab Legislative Assembly, has galvanized the international Sikh community to become more vocal in its demands for equal rights. The 83-year-old, who is the world’s oldest hunger-striker, began refusing to eat at his ancestral village of Hassanpur on January 16, 2015. Having completed 271 days of hunger-strike, he has been arrested and force-fed four times.

Writing to U.S. Secretary of State John Kerry in May, six California congressional representatives asked him to speak on behalf of Khalsa, stating: “We also request that you urge the Indian government to abide by its international human rights commitments under international law and ensure that these rights are safeguarded for political prisoners and all citizens in India.”