Chandigarh: Death is the ultimate truth of life. Everyone -from a king to a commoner has to die and every death is a lesson for a wise human being and a reminder that what memories he leaves behind, said Dal Khalsa leader Kanwarpal Singh in a considered reaction on the demise of former Indian Prime Minister and BJP leader A B Vajpayee. 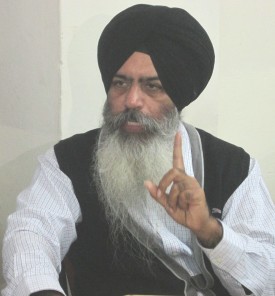 Sad as it is, it needs to be told even in this hour. Vajpayee’s death has triggered bitter memories of his attitude and role towards Sikhs, said he.

The moment his name comes in our mind, it reminds us as to how he led BJP’s protesters on 3 May 1984 in Delhi pressing the then Central government to send the Indian army to “liberate Golden Temple from anti-national people” as claimed and written by his closest colleague L K Advani in his book.

Vajpayee’s name also reminds us that after the army attack in June 1984, when he visited Amritsar in August that year, he justified the attack and rubbed salt on our wounds by saying that, “this attack should have happened six months back.”

In 1999, during the tercentenary celebrations of Khalsa Panth, as PM, he released 100 crore to RSS to penetrate into Sikh rank and file under the pretext of the celebrations. With that huge amount at its disposal, the RSS unleashed cultural terrorism against Sikhs through various means and ways.

And of course, his role towards the Muslim minority in the country and Gujarat in particular is another tale of his bias against a particular section of people of India, stated Singh.

“In life and in death, of our own ilk or the opposition, it is our duty to express our thoughts from Sikh point of view.