With Dalit in Rashtarpati Bhavan, neither the ‘supremacist’ mindset of “upper class” will change nor caste-based atrocities against Dalit Samaj would end, writes Kanwar Pal Singh of Dal Khalsa from Amritsar. 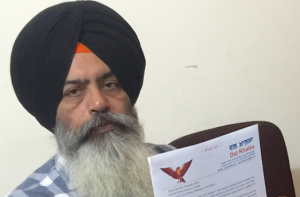 When the BJP president Amit Shah while announcing his party’s presidential choice said that Ram Nath Kovind- a Dalit had worked for Dalits and poor, his target was clear- luring and wooing large Dalit and down trodden vote bank aiming at 2019 Lok Sabha elections. A known anti-minority and anti-Dalit party (BJP) is fast changing its political colors and positioning. It has set its aim to win over country’s 16.6 percent politically significant Scheduled Caste population by all means.  Clearly, Kovind is BJP’s another bait to lure the Dalits.

Not lagging behind in a competitive politics, the Congress led UPA has fielded another Dalit Meira Kumar thus making Dalit v/s Dalit contest.

On the outset, let me clear that the Sikh doctrine is based upon casteless and classless society. Institution of langar is personification of this very doctrine.  However, I do admit that over the years the manuvadi caste system has taken deep roots in Sikh society also.

We have neither misgivings nor any illusion that Kovind occupying top post will end caste-based discrimination, hatred and atrocities against Dalits unleashed by cow vigilantes, pseudo patriots and so-called upper caste people. Nor it would help in their genuine political empowerment.

My submission is that Dalits need to be cautioned. They should not be carried away or swayed by BJP’s choice to field a Dalit for the top Constitutional post. It’s pretty clear that with Dalit in Rashtarpati Bhavan (which seems imminent), nothing would change vis-a-vis the plight of Dalits in this Hindu-India. They are facing institutional discrimination and worst kind of violence. Kovind’s presidency won’t end.

We need to remember that Kovind is not going to be the first Dalit to occupy top post. Congress backed K R Narayanan was the first Dalit President of India. Nothing changed on the ground.

One should not overlook that the post of the president of India is ceremonial. Kovind may be a nice political person. However, a wrong and falsely notion is being built as if Kovind represents the entire Dalit Samaj.

Handpicking a person from minority or Dalit community and then portraying him or her as a sole representative of that particular community has always been a grand design of both the Congress and the BJP. Ironically, in many cases such “obliged” persons in order to prove their loyalty end-up in felicitating their masters in unleashing excesses on their own people.

Sikhs witnessed two worst massacres in June and Nov 1984 when the president of the India was a Sikh face. Hundreds of Sikhs were killed in June by the army and thousands were butchered in the capital of India in Nov by frenzied mob engineered by ruling Congress. Gaini Zail Singh and Dr Manmohan Singh despite reaching the top constitutional and executive post respectively could not end the constitutional injustices to Sikh people. The Constitution continues to deny Sikhs their distinct religious status and identity.  Fact of the matter is that both never represented Sikh people or their voice. They were protégé of Gandhi family and never dared to move beyond the laxman rekha drawn by their masters.

Similarly, shortly after the Gujarat pogrom in Feb 2002, the BJP nominated a Muslim face Dr APJ Abdul Kalam for country’s top constitutional post. Has Dr. Kalam delivered any justice to victims of Gujarat massacre or ended the discrimination faced by his own aggrieved community despite his good reputation and work? Answer is big no.

Irrespective of what Kovind said at the time of his filing nomination papers (President’s post is above party politics), at the end of the day he will listen to his Master’s voice. In his case, the Hindutva party is the master.

The crux of the matter is that to create a respectable place for them in the existing polity driven by caste and communal vote-bank, Dalits will have to fight against all odds, injustices, discrimination and inequality on their own strength, while maintaining working relations and bonds with another oppressed minorities and communities. A Dalit in Rashtarpati Bhavan is nothing but tokenism.