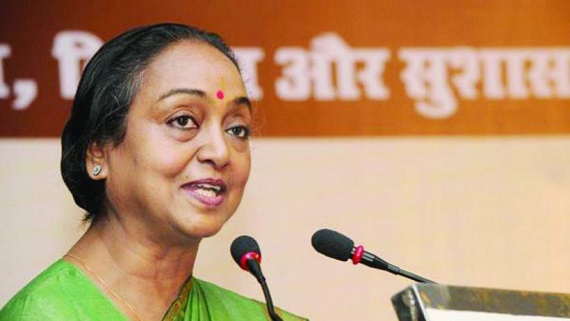 It is reported by the media that both the Samajwadi Party (SP) and Bahujan Samaj Party (BSP) has backed the Opposition choice and did not go the JD(U) way which backed Kovind — RJD’s Lalu Prasad called Nitish Kumar’s decision a “historic blunder” and “wrong decision.” He said he would meet the Bihar Chief Minister Friday and “urge him to review his decision… I will tell him not to commit a historic blunder”. He called Meira Kumar “Bihar ki beti” (daughter of Bihar).

Daughter of former Deputy Prime Minister and Dalit leader Babu Jagjivan Ram, 72-year-old Kumar, MP for five terms, is also from Bihar which Opposition parties think will have Nitish Kumar in a spot. At the meeting, leaders said that Kumar’s decision to support Kovind’s candidature was “most unfortunate” and that “he should not have done it”.

Though the decision to field Meira Kumar was taken unanimously, the name of former union home minister Sushil Kumar Shinde was also doing the rounds on the table.  But all others favored Meira  Kumar’s candidature, media sources said.

According to the left party leaders,  the Aam Aadmi Party, said Arvind Kejriwal will come out in support of the Opposition candidate. While the JD(U) deserted the Opposition camp, RLD’s Ajit Singh, who was not present at the last meeting, attended the Thursday meeting.