Chandigarh: Dal Khalsa is of the view that India is fighting a lost battle in Kashmir and to keep Kashmiris under its domination New Delhi was using brute force and full state’s might.

Party leaders H S Cheema, Kanwar Pal Singh and H S Dhami said Indian troops have been killing Kashmiri youth ruthlessly and the world powers were least bothered about the sufferings of people of this disputed state. They express solidarity with Kashmiri people and shared pain of the victims family.

Terming the Indian democracy as sham, they said the poll drama turned out to be totally flopped with below 7 percent people coming out to cast their votes as per official figures. 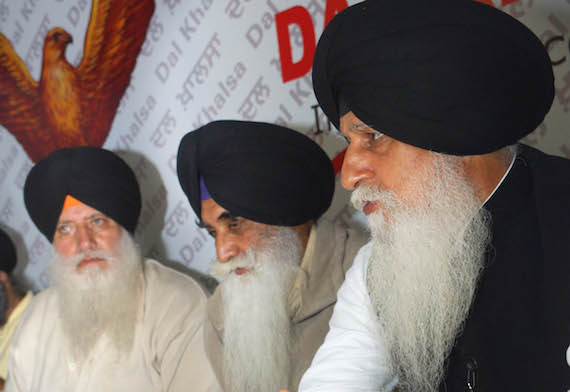 Unfortunately, Indian forces has killed at least eight youth including two teenage boys and injured around 200 when they opened fire on demonstrators protesting against the holding of Indian parliamentary elections in Badgam, Srinagar and Gandarbal districts on Sunday.

They said the elections cannot be substitute of right to self-determination and the New Delhi is constantly denying this fundamental right to people of Kashmir, Punjab and North eastern states.

The population especially young generation of Kashmir is being blinded, tortured and killed by forces since last year when Indian security forces killed Hizbul Mujahideen commander Burhan Wani. “The state repression is going on unabated with total impunity, said both and strongly condemned the manhandling of Hurriyat conference spokesperson Ayaz Akhbar by SoS of J&K police”.