Toronto: A retired CRPF official from India Tejinder Dhillion who was last week (23rd May) denied entry into Canada, but bowing to pressure from the Indian government Canada provided him with visa along with an air ticket from the Canadian high commission in India has reportedly fled the country in order to escape the tentative arrest warrants from Ontario Court of justice. 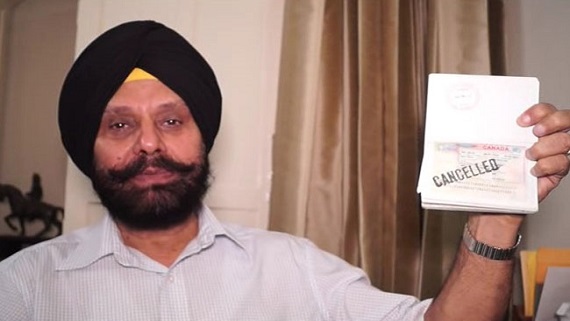 The May 29th, in camera pre-enquete hearing was held to evaluate the sufficiency of evidence of Tejinder Dhillon’s physical presence within the court’s territorial jurisdiction and allegation of torture and counseling torture.

Reacting to Ontario court’s refusal to take jurisdiction because of the presence issue, attorney Gurpatwant Singh Pannun, legal advisor to Sikhs For Justice SFJ stated “it is travesty of justice that we were asked to prove Dhillon’s presence in the country while Indian police officer was brought back to Toronto by the Trudeau government on Canada’s expense after issuing a public apology”.

“We are filing an application under Access to Information Act to get the official records of Tejinder Dhillon’s entry and exit in Canada from CSBA”, added Gurpatwant Pannu.

The private prosecution by Canada based Sikh rights group against Tejinder Dhillon was filed under sections 269.1 of the Criminal Code of Canada, which provides for the prosecution of officials who commit acts of torture. Section 7(3.7) grants expanded jurisdiction to Canadian courts to prosecute foreign officials for torture committed outside the country when that official is present in Canada.