Derby, England: Leading Sikh, Kashmiri and Assamese diaspora organisations in the England have, for the second time in recent weeks, come together on a common platform to address the worsening democratic deficit and humanitarian crisis which India’s Hindutva project is visiting on their respective homelands and co-religionists. During Indian PM’s London trip a fortnight ago, they had organised a massive protest in Parliament Square and raised questions over Indian PM’s human rights record.

Issues ranging from the denial of the key collective right of self-determination, to punishment of genocide perpetrators, to the question of political prisoners and the continuing systematic, organised and widespread violation of basic human rights, were considered. The event heard from the affected nations and communities, as well as from international experts and representatives of the British political parties, on how best to respond. 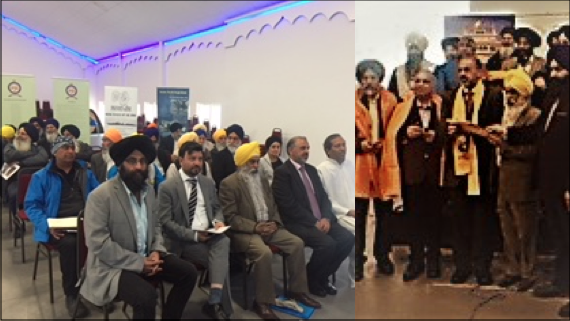 The need to implement international law, natural justice and true democratic values were the themes adopted by speakers that set out a roadmap resolve conflicts in Kashmir, Punjab and Assam and elsewhere, by peaceable means. Lord Nazir Ahmed (Chair, Parliamentarians for National Self-Determination), who earlier this month during a House of Lords debate urged the UK to challenge Indian PM Modi on India’s unlawful formal rejection of Article 1 (self-determination) of the 1966 Covenants on Human Rights, pledged to continue to voice that principled demand. Hindutva groups have responded to his intervention by calling for his seat in the Lords to be taken away. He dismissed them as insipid apologists for a fascist ideology that is increasingly being unmasked in the international community.

Prof Alfred de Zayas, a UN Independent Expert on ‘the promotion of a democratic and equitable international order’ (2012 to 2018), in a recorded message to the Conference, explained the primacy of the right of self-determination over the principle of ‘territorial integrity’ of states, saying that self-determination was the key to conflict resolution which all states have a duty to facilitate. ‘Referenda’ in affected regions he said, was the key to progress. Conflict and tragedy was the inevitable result of not adopting that path.

Hardial Singh (a Director of Voices For Freedom), who travelled from the USA to address the gathering, spoke of the need to document those violations that allow countries to unlawfully suppress legitimate freedom struggles, so that violators can – one day – be held to account. The terrible plight, he said, of Sikh prisoners of war and political prisoners across India was just one manifestation of a systematic assault on targeted nations.

Zafar Ahmad Quereshi of Kashmir Campaign Global spoke of the war that India has declared on the people of Kashmir. The use of rape as a weapon in that war was now apparent to the world; the increasing depravity of Hindutva forces would only hasten the day when freedom would be won in his homeland. He urged targeted nations to continue the impressive collaborative approach to counteract Hindutva transgressions.

Dr Mukul Hazarika of Assam Watch made a passionate demand for freedom in Assam saying that Indian troops in Assam have carried out systematic aggression for decades, hiding behind the impunity afforded by the notorious Armed Forces Special Powers Act. He castigated the Hindutva myth of ‘Akhand Bharat’ as a means to impose colonialism over authentic national groups, whether they are defined by religion, culture or history.

The Rev John Joshva, a Church of England cleric, expressed his anguish over the almost daily attacks on Christians and their places of worship in India. He described how the victims were often charged with fake offences, rather than protected from Hindutva mobs. He offered to provide evidence of that group’s extremist activity in its drive to intimidate ‘minorities’ that do not fit the ‘majoritarianism’ Hindutva agenda.

Leading Sikh Advocate, Amar Singh Chahal, sent a recorded message to the Conference from Punjab, calling for independence for the Sikhs as the only viable option to save their nation as a distinct entity. He was joined by Dr Gurdarshan Singh Dhillon, a historian, who saw Hindutva aggression as a challenge that the Sikhs could only meet by exercising the right of self-determination.

Dr Gurnam Singh, an academic and broadcaster, posited the equivalence between Hindutva and fascist Nazi ideology. It was, he said, important for self-determinists to work with all vulnerable sections of the population so as to deconstruct the reality of a small elite oppressing the masses – whether in the name of Hindu nationalism or class supremacy.

Prof Nazir Shawl, leading campaigner for Kashmiri self-determination sent a message conveying his support of referenda-based freedom in Kashmir as well as in the Sikh homeland of Punjab.

Likewise, Dr Amarjit Singh of the Khalistan Affairs Centre in the USA sent his best wishes on Khalistan Declaration Day – the event was held on the anniversary of the Sikh nation’s declaration of independence in 1986.

Manpreet Singh, who is engaged in the development of a World Sikh Parliament characterised India as the ‘worst’ (as opposed to the ‘biggest’) democracy where human rights and the rule of law were meaningless for hundreds of millions of people. He saw self determination in national homelands as well as meaningful collaboration with all those, including the Moolnivasis, as the key to bringing justice to Indian controlled territories.

Ranjit Singh Srai, shared with the Conference a message from Leanne Wood, Leader, Plaid Cymru, the Welsh nationalist party who said “We stand in solidarity with the communities which have faced oppression in Indian controlled territories and call for an immediate end to the violence and repression faced by Sikh, Kashmiri, Moolnivasi, Christian and other communities.” He also passed on the commitment of local Labour MP Chris Williamson to work with the diaspora communities whom he congratulated for organising an important event. In addition, the SNP MP for the Scottish Sikh, Jagtar Singh Johal (who has been tortured and imprisoned without trial in India for 6 months, for speaking out against human rights violations) sent a statement to the Conference saying “It’s imperative that my constituent is afforded an open and transparent judicial process by the Indian authorities…. We will not rest until we secure justice for Jagtar”.

The Conference ended with Lord Ahmed, Hardial Singh and Dr Hazarika being honoured according to Sikh tradition by Amrik Singh Sahota, OBE (Council of Khalistan) and Joga Singh (Babbar Akali Organisation). They were also presented with mementos from the National Sikh Heritage Centre & Holocaust Museum in Derby. The museum, fittingly, houses many priceless artefacts and historical analyses, charting the sovereignty of the Sikh nation and the genocide suffered by it by India since 1984.