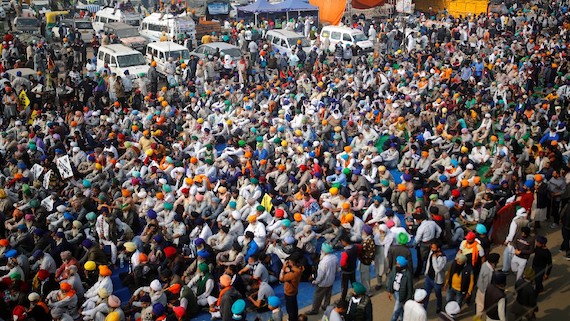 Millions of farmers have been braving winter, facing batons, tear gas shells, water cannons, cut-off from basic necessities like fresh water and toilets, assault from anti-social elements funded by the government, and yet remain in high-spirits from the last two and a half months on the borders of the national capital, Delhi. This zealousness of farmers shows these hardships are nothing compared to the consequences they will have to face if these farm laws get implemented. They are haunted by the thought of losing authority of their farmlands due to several intended loopholes in these laws.

These laws provide a safe passage for big corporates into the agriculture sector so that they can gradually take control of the farmlands, and eventually, the produce.

It is important to understand first why these big corporates are preying upon the agricultural lands of Punjab and other states. For the past many years, the economy of India has been in decline. Demonetization, followed by coronavirus pandemic, has hit small and marginal farmers hard, along with small businesses and entrepreneurs. These major events also affected the earning and spending graph of the middle-class population of India, who also happen to be the primary consumers. The demand for a wide range of products has decreased and will eventually come to halt if the current economic scenario continues. Hence, the corporate sector is experiencing a decline in sales.

Agriculture is the only sector in which demand never stops, there will always be demand for food. So, a few corporate giants are willing to take over the agriculture sector in the upcoming years to gain complete control of the country’s agriculture market. Whether it be the free markets or contract farming, there is no escape for the farmers from the fear of losing their lands. Contract farming is not new to the farmers, but it combined with the new farm laws can prove fatal for landowners. Private buyers will decide what, when and how farmers grow on their fields. They can decide the price at which they would buy the produce and there is no legal support for the farmers if they feel cheated. Exploited farmers will eventually sell their farmlands to big businesses or become laborers for them on their own lands.

These laws don’t just affect farmers but also consumers as new laws give corporations the freedom to buy, sell and store the produce. This will be an issue with consumers in the long run. The corporates will monopolize the prices by ruling the demand and supply chain. Moreover, working on agricultural land will give huge tax breaks to these corporations.

So, there are more than enough reasons for big businesses to lobby the newly formed farm laws.

This partnership of government and corporate houses, however, is proving to be fatal for most of the country’s citizens who raise voice against either of them. Enough examples can be found from most recent events where journalists, activists, farmers, and social media users were arrested and tortured for trying to bring the truth to light through different platforms. The freedom of press, freedom of speech, right to peaceful protests are compromised from time to time by the Modi-led government with the help of state-sponsored media houses and backed by the corporate giants.

* Jaspreet Kaur is a Legal Counsel associated with the Voices for Freedom.