London (January 26, 2015): As US President Obama today sat through the tedium of Indian Republic Day propaganda in New Delhi, he must have wondered how a state that claims to celebrate freedom and democracy and which aspires to fight the poverty of hundreds of millions can manage to pursue an agenda so absurdly contradictory. Having become the world’s biggest purchaser of expensive military hardware, the state that unashamedly suppresses authentic independence movements by brute force is now led by a right wing Hindu nationalist who until very recently was persona non grata in the USA for his alleged role in the mass killings of Muslims. 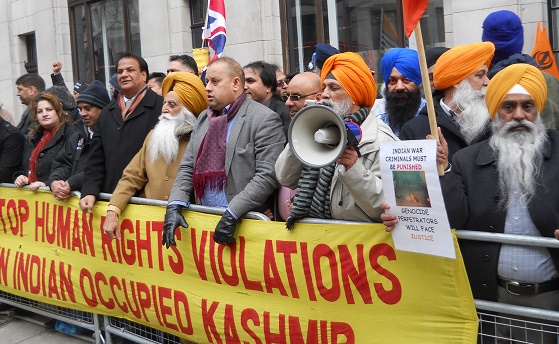 These were the observations of the organisers of a vocal joint Kashmiri -Sikh protest outside India’s High Commission in London today; Amrik Singh Sahota, OBE of the Council of Khalistan and senior Kashmiri leader Professor Nazir Shawl highlighted the hypocrisy of India’s position and called for the international community to reconsider the wisdom of abandoning core principles in the pursuit of business interests.

As an array of Sikh and Kashmiri organisations protested against the denial of human rights by India, the foremost of which being the right of self-determination, India’s record as a serial violator of international law was identified as a major threat to peace in South Asia. The wave of Hindutva fanaticism sweeping India in recent months has seen ‘minority’ nations openly threatened with subjugation by RSS and BJP leaders of a “Hindu nation”. Belligerence towards Pakistan and warnings to China have ratcheted up the tension in an already volatile region. 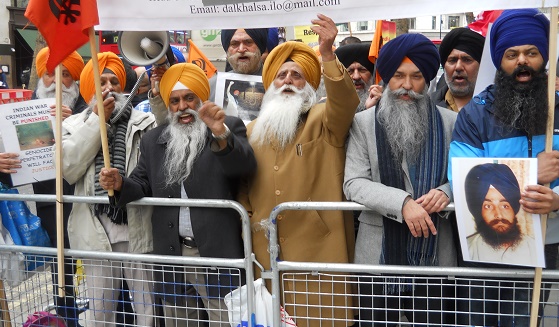 Raja Amjad Khan, Chair of the All Parties Kashmir Co-ordination Committee, spoke of the resolute determination of Kashmiris and the Sikhs to peacefully decide their own destiny in their respective homelands. Lovshinder Singh Dalewal, Gurdev Singh Chohan, Manmohan Singh and other stalwarts of the Khalistan struggle demanded the release of all Sikh political prisoners – including prisoners of war who remain incarcerated following India’s illegal war in Punjab of the 1980s and 1990s. They pledged to work with Kashmiris to dismantle India’s illegal occupation of their territories.

Slogans of “Kashmir Zindbad” and “Khalistan Zindabad” left the Indians in no doubt what the peoples of those regions demand. It will take some serious reflection in capitals around the world to avert yet more misery, after many decades of Indian colonialist policies have already cost hundreds of thousands of lives. When India’s Home Minister Rajnath Singh recently admitted that the Sikhs were subjected to genocide in 1984, people had a right to expect that international punitive action to follow, not appeasement of a fascist state. The protestors hoped Obama’s hasty folly in gifting India’s PM with a lax deal on nuclear supplies would not be regretted in the same way as the appeasement of Hitler in the build-up the World War II.