New Delhi: A retired official belonging to India’s Central Reserve Police Force (CRPF) was reportedly denied entry into Canada. A report in Hindustan Times (HT) states that Tejinder Dhillon, who retired as CRPF inspector general of police in 2010, was denied entry at Vancouver airport as he had served with the Force, which had “committed widespread and systemic human rights abuses’.

Scroll.in has quoted news agency ANI while reporting that India’s Ministry of External Affairs responded to the report, saying that this characterisation of the CRPF was “completely unacceptable”, adding that it had taken up the incident with Canada. 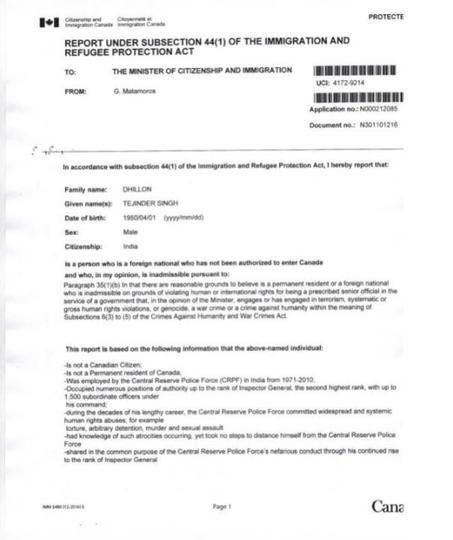 The report in Hindustan Times (HT) states that: “A document given to Dhillon at the airport stated he was a “prescribed senior official in the service of a government that, in the opinion of the Minister, engages or has engaged in terrorism, systematic or gross human rights violations, or genocide, a war crime or a crime against humanity”.

The report further states that in a second report issued by immigration authorities at Vancouver airport stated that Terjinder Dhillon could not be granted entry  to Canada as he had served with the CRPF, which had “committed widespread and systemic human rights abuses, for example torture, arbitrary detention, murder and sexual assault”.

HT has published a scanned document with its news report in it’s online edition but the scanned image of the document is of low resolution and its text is not readable.