Chandigarh: As per the script the workers of Indian National Lok Dal (INLD) a second opposition in the Haryana’s state assembly here on Monday enacted a protest over the controversial Sutlej-Yamuna Link (SYL) canal by blocking roads, including in Ambala and Sirsa districts, thus disrupting normal vehicular movement and causing great harassment to commuters. 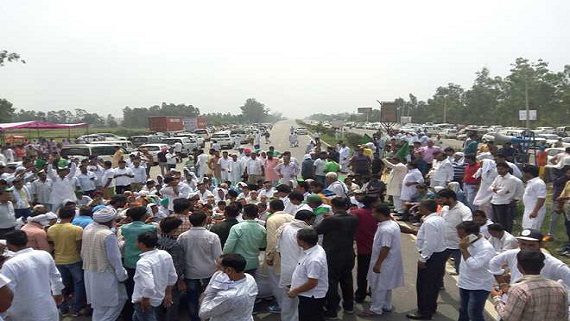 The gathering  at the Shambhu barrier was reportedly  lifted at around 3 pm.

The among the opposition party of Haryana the INLD has earlier this month announced that its activists will stop vehicles from Punjab at the Shambhu barrier near Ambala to press the state’s demand for construction of the controversial canal, as has been dictated by the Supreme Court of India. Private vehicles would not be stopped during the day-long protest, the opposition party said. People travelling from Punjab have to cross Haryana to go to Delhi and beyond, notes the Hindustan Times (HT).

In the morning, INLD activists gathered on the Ambala-Delhi Inter-State Highway.

Led by senior leaders, INLD activists also gathered to act along at various protest points in Haryana, including in Ambala and Sirsa districts which lie close to the state’s border with Punjab.

They squatted on roads, placed tyres and even parked their own vehicles and tractors to stop vehicular movement, causing inconvenience to thousands of commuters, media reports said. 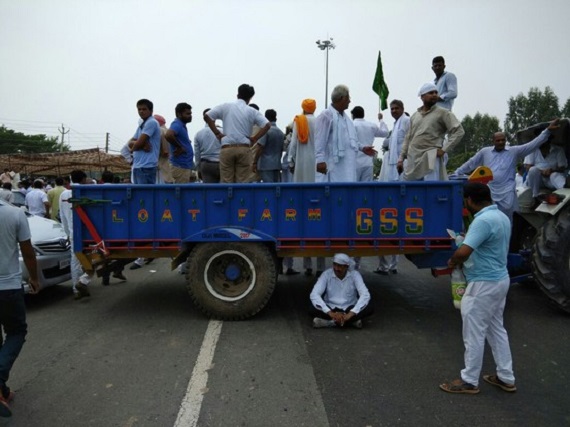 Protesters on the Punjab-Haryana border at Lalru. Tribune photo:

Furthermore, the government officials indicated that some road diversions could be made if the INLD activists reached Inter-State Highway-1 and tried to block it near Ambala, 45 km from the shared capital Chandigarh. Haryana home secretary Ram Niwas said all precautionary measures were being taken to ensure smooth passage of traffic through Haryana here today.

Meanwhile, due to the ongoing political stunt both state run run transport Pepsu Road Transport Corporation and Punjab Roadways decided not to ply their Haryana and Delhi-bound buses causing losses worth crores of rupees to the state exchequer and causing great inconvenience to the general public at large, notes The Tribune (TT).

Meanwhile, the party stated that they will perform the protest peacefully  and will keep emergency vehicles out of the proportion  they will not allow any other vehicle from Punjab to enter Haryana.

Sufficient security arrangements had been made to deal with the situation and to ease the inconvenience that common people had to face, Haryana DGP BS Sandhu said while interacting with HT.

Earlier in February INLD’s general secretary Abhay Chautala lead his party workers towards Shambhu, 10 km from Ambala, on the Inter-State highway-1 and claimed that will start digging the canal in Punjab. Along with several supporters, subsequently Abhay Chautala was detained by the police and later escorted back to Haryana.

On the Punjab side the state  Police’s Patiala Range IG AS Rai stated that the traffic would be diverted to routes, including Ghanaur-Pehowa and Panchkula-Nada Sahib, while 1,000 Punjab Police personnel would be deployed to maintain law and order.

Senior police officials, including SPs and DSPs, would also be stationed at key locations, AS Rai further added to his statement.