Amritsar/ Chandigarh: Sikh Political Prisoner Prof. Devinderpal Singh Bhullar was released on 21 days parole on April 23 after 21 years of imprisonment. Since his conditional release from jail, Prof. Devender Pal Singh is staying at Amritsar along with his spouse Bibi Navnit Kaur.

Talking to Sikh Siyasat News (SSN) Bibi Navnit Kaur said it’s first parole of Prof. Bhullar since his arrest 21 years ago. “As the sentence was converted to imprisonment for life, it was our legal right to claim parole. Parole is granted to those serving imprisonment for life. We had applied for the parole and it was granted only after completing all legal processes”, said Bibi Navnit Kaur. She added that this was only a temporary release and Prof. Bhullar will have to return on May 12. 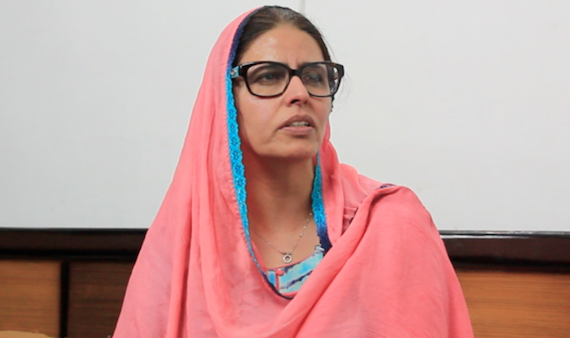 Talking about their daily routine, Prof. Bhullar’s wife said: “For most of the time we are staying at our home. We went to Darbar Sahib twice, first immediately after the release and then on another day. It’s going very busy as a number of people visit us daily to inquire about well-being. People want to meet Prof. Bhullar after such a long time”.

She said that Prof. Bhullar’s health has improved after he was transferred to Amritsar form Delhi. “After jail transfer, there were signs of improvement in his health condition. And here at home he feels even better”, said Bibi Navnit Kaur.

“His health condition is still improving and some times he faces behavioral issues. I take particular care about his medicine. Sometimes particularly, if his medicine is delayed, he loses analytical faculties and turns submissive, accepting anything told by other people and repeats anything suggested by others without analysing it”, she said adding that “sometimes, you would ask one thing but he would answer about something else. So such type of issues are still there. But there is significant improvement in his condition as compared to his condition in Delhi”.

Talking about Prof. Bhullar’s case, she said that people from all walks of life extended their help in this case. In 2001, when the trial court announced death sentence in this case, without any substantial evidence, there was widespread outrage against it. More serious concerns were raised in 2003 when the Supreme Court stamped the TADA court’s verdict. In 2012-13 also people raised strong voice against the verdict.

“A multitude of people- from individuals to groups, politicians, parliaments and governments of foreign countries have extended their support in this regard.

When asked to point-out anyone who has played special role in Prof. Bhullar’s case, she said that everyone’s contribution is special for them. “Akal Purakh has listened to Ardas of the Sikh Panth and blessed us with these days”, she added.

On being asked about their future plans, she said that days are fleeting and only a few days of parole are left.

“As a number of people are visiting to inquire about Prof. Bhullar’s health, it is very tiring. It was such a long fight that even I feel tired now. Then there are conditions of parole too. So we will stay in Amritsar for remaining days of parole”, she said.

Sharing her future expectations, Bibi Navnit Kaur said that Prof. Bhullar is eligible to seek premature release and they would initiate efforts in this regard.

“Our primary concern is health condition of Prof. Sahib and we will also make efforts to seek his release”, she added.