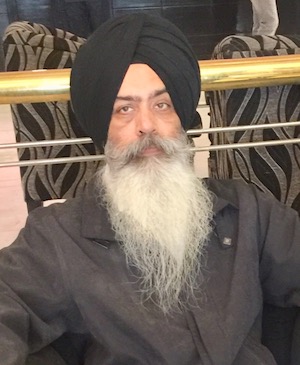 This is in response to the write-up in ‘The Tribune’ by K N Pandita on CAA with reference to the horrific terror strike at a historic Gurdwara- Guru’s place- in Afghanistan, killing 25 innocent Sikh worshippers. The author seems to justify the controversial citizenship amendment legislation in the context of this attack.

The writer ex-Director, Centre of Central Asian Studies, Kashmir University has asked those who are opposing the Citizenship Amendment Act (CAA) 2019 whether they would re-think their opposition to the act in the wake of Kabul gurdwara episode.

Cutting across the geographical and religious boundaries, the world from UN to OIC to western countries all in one voice has condemned the dastardly act carried out by the savages of the ISIS. 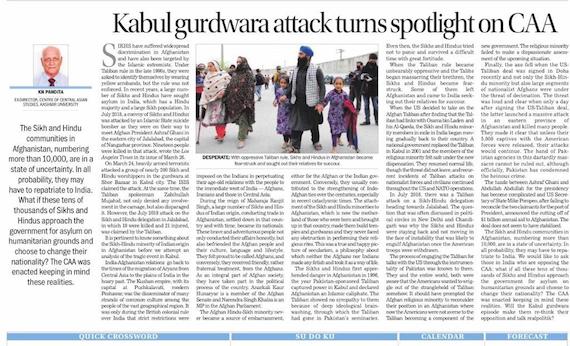 A snapshot of write-up published in The Tribune

Let me make it clear at the very outset. The opposition is not against the Citizenship Act 1955 in itself but to the 2019 amendment under which Muslims have been omitted. The 2019 amendment provides for a path to citizenship for religiously persecuted minorities namely Hindus, Sikhs, Buddhists, Jains, Parsis and Christians from Afghanistan, Bangladesh and Pakistan. Earlier the act had been amended in 1986, 1992, 2003, 2005 and 2015.

Secondly, the opposition to CAA got teeth, when the Home Minister Amit Shah speaking in the Parliament categorically stated that the next step of his government is National Register of Citizens (NRC).

The CAA/NRC posed a direct threat to the citizenship of Muslims of this country. The basic objection is how can the government pass an act or amend the earlier one targeting a particular religion. It goes against the spirit of the Constitution and democratic ethos. So much so, the United Nations human rights council chairperson Ms. Bachelet has termed it a discriminative law and the UN Secretary General Antonio Guterres raising his concern said that “There is a risk of statelessness” for two million people, mostly belonging to the Muslim community due to enforcement of CAA. The government of India or any non-state writer cannot run down the observations of these two top world diplomats. Here, I would like to refer to an example of Malala Yousafzai resident of Swat Valley in north-west Pakistan. She wasn’t denied asylum by the United Kingdom just because she was a Muslim and came from an Islamic country- the core reason Indian government has been lending to justify exclusion of Muslims from the Act. 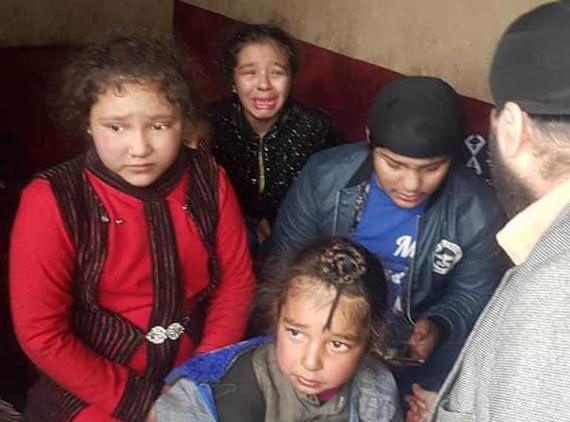 Quoting the gruesome killings of Sikhs in Kabul, the writer has tried to justify the CAA by saying that the CAA was enacted keeping in mind these realities. The Afghani Sikhs have been living in a fear of climate since last two decades. Most of them shifted to Delhi, handful to Peshawar in Pakistan and also few families went to Canada. Hundreds of Afghan Sikhs that are residing in Delhi are yet not given Indian citizenship despite several representations to successive governments by the DSGMC. 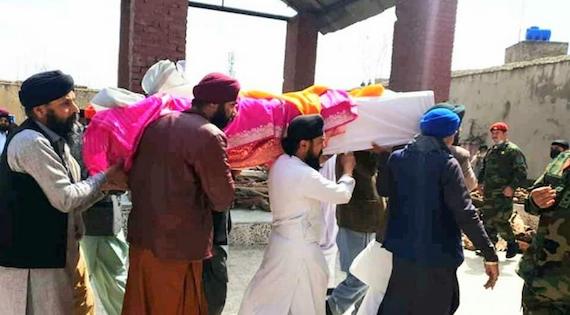 K.N.Pandita has posed a question to anti-CAA people that what if all these tens of thousands of Sikhs and Hindus approach the government for asylum on humanitarian grounds and choose to change their nationality? Knowingly or unknowingly, the writer has ignored the fact that the 2019 amendment clearly says that the person of above-said religions will be entitled for citizenship that has entered India on or before 31 December 2014. Here by making it clear that the Sikhs, who will come to India from Afghanistan now won’t be provided with the citizenship and that they would have to get settled with a refugee tag. 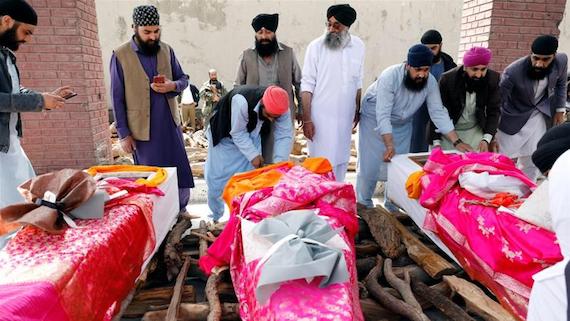 On threat to Sikhs in Afghanistan, I will quote Singapore-based author and filmmaker Amardeep Singh, who recently visited Afghanistan for his project to trace the footprints of Guru Nanak across nine countries. He said “Aren’t minorities singled out in the US? Doesn’t that happen in India too? Minorities everywhere will face situations where they will be singled out. 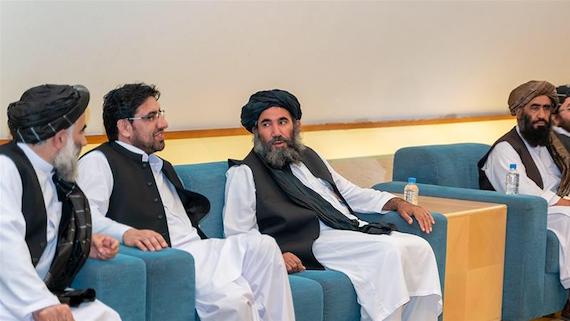 Strangely, the attack comes a day after the United States announced to cut its aid to Afghan government by $1 billion over frustrations that feuding political leaders could not reach an agreement and form a team to negotiate with the Taliban.

The Taliban who is gearing up to regain the seat of power in Kabul after the withdrawal of US forces, though denied their role in the attack on Gurdwara but stopped short of condemning it let alone promising the local Sikh population to protect them from any further attack. Had the Taliban done it in clear words, their gesture even if lip service would have boasted the morale of Sikhs, who are under constant threat and fear? Regrettably, the Taliban has maintained its silence so far.

I remember that when in August 2010 some miscreants in the name of ‘Jihad’ threatened valley Sikhs to leave Kashmir or join the struggle, Hurriyat Conference chairman SAR Geelani in a written statement stood by the beleaguered Sikh community and re-assured the local Sikhs that nobody would force them to leave the valley.

Sikhs have been made scapegoat in the larger game plan being played by major world players in Afghanistan. Yesterday’s massacre of Sikhs is fallout of power struggle going on in Afghanistan especially ever since US signed peace deal with Taliban at Doha on Feb 29, 2020. Since then, knives are out and hidden hands within and outside Afghanistan are hell bent to sabotage the deal. It’s testing time for Afghani Sikhs and their faith. Sikhs have historical Gurdwaras in Afghanistan. Guru Nanak Dev on his way back from Mecca travelled through Afghanistan. After July 2018 attack, this is second time that they have been targeted in a brutal way by ISIS militants.

There’s general understanding that the ISIS considers all non-Muslims and even Muslims including Taliban, who have refused to come under their self-proclaimed Khalifat as Kafirs. It was Daesh militants, who killed 32 Muslims belonging to Shia community on March 6 at a ceremony held to commemorate the 1995 slaying of Abdul Ali Mazari, the leader of Afghan’s ethnic Hazars. US officials have admitted that ISIS has been degraded because of US operations and also by Taliban assaults against them.

To further scare the Sikh population, it is being reported that ISIS have threatened them to leave the country within ten days. To avoid further casualties, Afghani Sikhs have started availing alternate options before them. At the time of worldwide lockdown due to corona virus outbreak, Afghan Sikhs have fewer options before them to shift to safer place. They look towards international community and Sikh Diaspora for their protection. 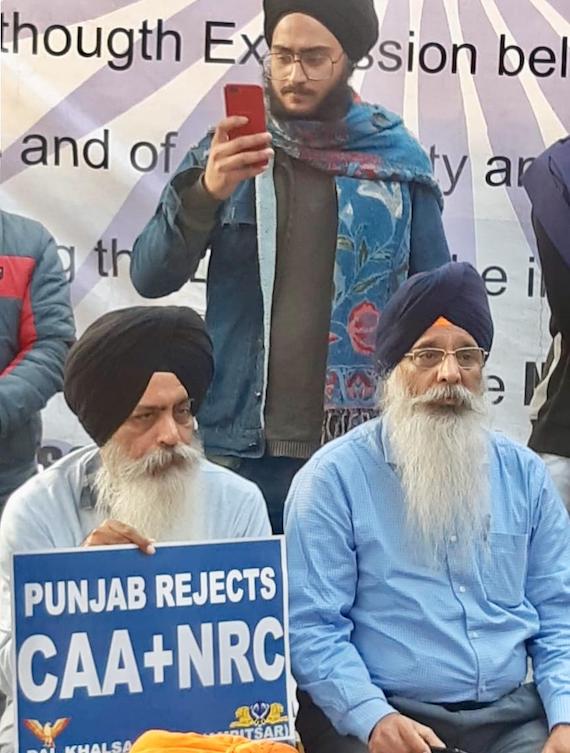 It is learnt that that the Modi dispensation is in touch with Sikh population in Kabul and the parleys are going on for their settlement in India. Back home, as the Narendra Modi Govt has utterly failed to crush the “people’s struggle” against CAA, there’s possibility that New Delhi might use the Afghani Sikh card to browbeat the anti-CAA people.

The SGPC and other Sikh organisations, Punjab based or abroad, should come forward to help these families in every possible ways including their settlement at a safer place of their choice. Who-so-ever whether India or Pakistan that comes forward to help Afghani Sikhs should do so on humanitarian grounds keeping the politics apart.