New Delhi (Dec. 08): Decades of poorly regulated arms flows into Iraq as well lax controls on the ground have provided the armed group calling itself IslamicState (IS) with a large and lethal arsenal that is being used to commit war crimes and crimes against humanity on a massive scale in Iraq and Syria, Amnesty International said in a new report on December 08.

Drawing on expert analysis of thousands of verified videos and images, Taking Stock: The arming of Islamic State catalogues how IS fighters are using arms, mainly looted from Iraqi military stocks, which were manufactured and designed in more than two dozen countries, including Russia, China the USA and EU states. 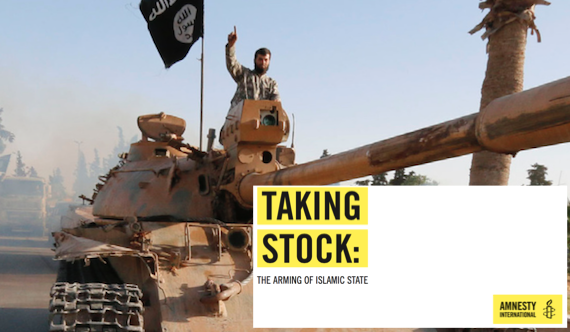 “The vast and varied weaponry being used by the armed group calling itself Islamic State is a textbook case of how reckless arms trading fuels atrocities on a massive scale,” said Patrick Wilcken, Researcher on Arms Control, Security Trade and Human Rights at Amnesty International.

“Poor regulation and lack of oversight of the immense arms flows into Iraq going back decades have given IS and other armed groups a bonanza of unprecedented access to firepower.”

After taking control of Mosul, Iraq’s second largest city, in June 2014, IS fighters acquired a windfall of internationally manufactured arms from Iraqi stockpiles. They included US-manufactured weapons and military vehicles, which they used to take control of other parts of the country, with devastating consequences for the civilian population in those areas.
The vast array of weapon types captured and illicitly acquired have enabled IS to carry out a horrific campaign of abuse. Summary killings, rape, torture, abduction and hostage-taking – often carried out at gunpoint – have forced hundreds of thousands to flee and become internally displaced persons (IDPs) or refugees.

Dizzying array of arms:
The range and scope of IS’s arsenal reflects decades of irresponsible arms transfers to Iraq. This has been compounded by multiple failures to manage arms imports and to put in place oversight mechanisms to avoid improper end uses during the US-led occupation after 2003. Likewise, lax controls over military stockpiles and endemic corruption by successive Iraqi governments have added to the problem.

The report documents IS use of arms and ammunition from at least 25 different countries, though a large proportion were originally sourced by the Iraqi military from the USA, Russia and former Soviet bloc states. These arms flows were funded variously by oil barter arrangements, Pentagon contracts and NATO donations. The bulk have been seized from or leaked out of Iraqi military stocks.

Among the advanced weaponry in the IS arsenal are man-portable air defence systems (MANPADS), guided anti-tank missiles and armoured fighting vehicles, as well as assault rifles like the Russian AK series and the US M16 and Bushmaster.

Most of the conventional weapons being used by IS fighters date from the 1970s to the 1990s, including pistols, handguns and other small arms, machine guns, anti-tank weapons, mortars and artillery. Soviet Union-era Kalashnikov-style rifles are commonplace, mainly from Russian and Chinese manufacturers.

“This shows again that arms export risk assessments and mitigation measures to unstable regions require a long term, root-and-branch analysis. This must include assessing if military and security units are capable of effectively controlling stockpiles and abide by international human rights and humanitarian standards,” said Patrick Wilcken.

IS fighters and other armed groups have also resorted to forging their own improvised weaponry in crude workshops. Examples include mortars and rockets, improvised hand grenades, explosive devices (IEDs) including car bombs and booby-traps, and even repurposed cluster munitions, an internationally banned weapon. In some instances IEDs constitute landmines prohibited by the global Mine Ban Treaty.

Supply chains:
Taking Stock covers Iraq’s lengthy history of arms proliferation and the complex supply chains that most likely brought some of the more recent weapons into IS hands.

The Iraqi army’s stockpile swelled in the late 1970s and early 1980s, especially around the Iran-Iraq war. This was a seminal moment in the development of the modern global arms market, when at least 34 different countries supplied Iraq with weapons – 28 of those samestates were also simultaneously supplying arms to Iran. Meanwhile Iraq’s then-President Saddam Hussein oversaw the development of a robust national arms industry producing small arms, mortar and artillery shells.

After Iraq invaded Kuwait in 1990, a UN arms embargo decreased imports until 2003, but during and after the US-led invasion Iraq was again flooded with more weapon imports. Many of these never adequately secured and audited by the US-led coalition forces and the reconstituted Iraqi armed forces. Hundreds of thousands of those weapons went missing and are still unaccounted for.

More recent efforts to rebuild and re-equip the Iraqi army and associated forces have once again resulted in a massive arms flow into Iraq. Between 2011 and 2013, the USA signed billions of dollars’ worth of contracts for 140 M1A1 Abrams tanks, F16 fighter aircraft, 681 Stinger shoulder held units, Hawk anti-aircraft batteries, and other equipment. By 2014, the USA had delivered more than US$500 million worth of small arms and ammunition to the Iraqi government.

Endemic corruption in the Iraqi military, as well as weak controls in place on military stockpiles and tracking weapons, meant there was an ongoing high risk of such weapons being diverted to armed groups including IS.

Amnesty International is calling on all states to adopt a complete embargo on Syrian government forces, as well as those armed opposition groups implicated in committing war crimes, crimes against humanity and other serious human rights abuses.

They must also adopt a “presumption of denial” rule on arms exports to Iraq, meaning that transfers could only be carried out after strict risk assessments. Military or police units in Iraq which are singled out for exceptions must first demonstrate that they stringently and consistently respect international human rights and humanitarian law and that they have the necessary control mechanisms in place to ensure weapons will not be diverted to armed groups.

Also, any state considering potential arms transfers to armed forces in Iraq must first invest heavily in pre- and post-delivery controls, training and monitoring that meet international standards for the management and use of such arms.

All states that have not yet done so should accede to or ratify the global Arms Trade Treaty immediately. One of the treaty’s objectives is “to prevent and eradicate the illicit trade in conventional arms and prevent their diversion”. The treaty also contains provisions which aim to stop arms transfers where there is an overriding risk they could be used for serious international human rights or humanitarian law violations.

“The legacy of arms proliferation and abuse in Iraq and the surrounding region has already destroyed the lives and livelihoods of millions of people and poses an ongoing threat. The consequences of reckless arms transfers to Iraq and Syria and their subsequent capture by IS must be a wake-up call to arms exporters around the world,” said Patrick Wilcken.