Imphal, Manipur (August 22, 2014): As per recent information the police has again arrested human rights activist Irom Chanu Sharmila, who has been on fast seeking revocation of draconian Armed Forces Special Powers Act (AFSPA) and was released from Jail just two days back after she was acquitted by a trial court.

She was previously arrested on the charges of attempt to commit suicide and was kept in jail for more than a year, where she was force fed by rice-tube.

As per recent reports the Imphal police re-arrested Irom Chanu Sharmila on Friday, the 22 August. 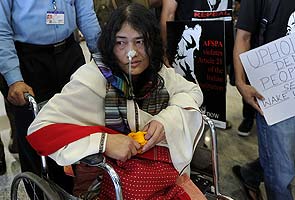 Regarded as the Iron Lady of Manipur, Irom Sharmila was continuing her struggle and fast after being released from jail and the Police arrested her from a protest venue in Imphal.

Irom Sharmila has been on a prolonged hunger strike for over 14 years, demanding the repeal of theArmed Forces (Special Powers) Act (AFSPA). She was arrested by the Manipur police shortly after she began her hunger strike on November 2, 2000 and charged with attempting to commit suicide – a criminal offence under Indian law. In March 2013, a Delhi court also charged Sharmila with attempting to commit suicide in October 2006, when she staged a protest in Delhi for two days.

Sharmila is being detained in the security ward of a hospital in Imphal, Manipur, where she is force-fed a diet of liquids through her nose. She has never been convicted for attempting to commit suicide. However, as the offence is punishable with imprisonment for up to one year, she has been regularly released after completing a year in judicial custody, only to be re-arrested shortly after as she continues her fast.

Last year, over 18,000 people from across India supported an Amnesty International India campaign calling for the unconditional release of Sharmila. India’s National Human Rights Commission also acknowledged that she was a ‘Prisoner of Conscience’ who was being detained solely for the peaceful expression of her beliefs and called for the removal of restrictions imposed on access to her.

Speaking to Amnesty International India in September 2013, Sharmila, inspired by Mahatma Gandhi’s philosophy of non-violence, said: “My struggle is my message. I love my life very much and want to have the freedom to meet people and struggle for issues close to my heart.”

In February 2012, the Supreme Court of India observed in its ruling in the Ram Lila Maidan Incident versus Home Secretary, Union of India and Others case that a hunger strike is “a form of protest which has been accepted, both historically and legally in our constitutional jurisprudence.” The British Medical Association, in a briefing to the World Medical Association, has clarified that, “[a] hunger strike is not equivalent to suicide. Individuals who embark on hunger strikes aim to achieve goals important to them but generally hope and intend to survive.” This position is embodied by the World Medical Association in its Malta Declaration on Hunger Strikers.

The AFSPA, which has been in force in parts of North-eastern India since 1958, and a virtually identical law in force in Jammu and Kashmir since 1990, provides sweeping powers to soldiers, including the power to shoot to kill in certain situations and to arrest people without warrants. The Act also provides virtual immunity from prosecution for security personnel, by mandating prior permission from the central government, which is almost never granted.

The AFSPA falls short of international human rights standards, including provisions of treaties to which India is a state party; and is inconsistent with India’s international legal obligations to respect and protect the right to life, liberty and security of person, to freedom from torture and other ill-treatment, and to an effective remedy.