Amritsar: Joining issue with Indian army chief Bipin Rawat regarding his statement on “attempts” to revive insurgency in Punjab through “external linkages”, the Dal Khalsa said the army chief has overlooked Maur bomb blast case that has internal linkages having roots in dera Sirsa.

Dal Khalsa’s spokesperson Kanwar Pal Singh in an interview to a news agency said the people of Punjab are of sure that the footprints of Maur blast will reach to Delhi via Sirsa. “Police under Sukhbir Badal the then Home Minister blamed militants for the terror act, which turned out to be a farce”. 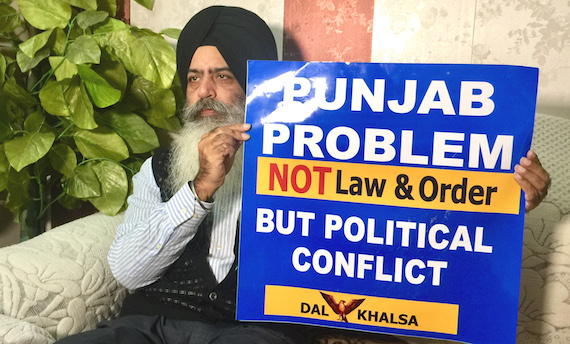 Contesting Indian army chief’s statement that “it would be too late” if India does not act soon to stop the attempts to revive so-called “terrorism” in Punjab, the pro-freedom group leader categorically stated that there’s no “terrorism” in Punjab. New Delhi has always wrongly portrayed Punjab problem as a law and order where as its political conflict between Punjab and India that requires peaceful political resolution.

“The only attempts that are being made in Punjab is to secure and protect basic fundamental rights of the peoples including the right to self determination upheld and safeguarded as per the UN charter to which India is a signatory”, said he and added that other than that it’s the figment of imagination of the security establishment, who always thrive on upping the ante for their own legitimacy and survival.

Which law of India allows the army chief to issue threats to the peace-loving people of Punjab? Why should the people of Punjab be made scapegoats of India’s war mongering with Pakistan?

Exposing the double standards of the Indian government, he said when the Pakistan army chief speaks on political and foreign policy matters, India cries foul, but on the other side, the present dispensation under Narendra Modi is allowing its own army chief to issue political statements whether it relates to Punjab, Kashmir or Assam.

On army chief blaming Sikhs For Justice for trying to destabilize the peace in the region, he said this is a loaded question, straight from the archives of the government.

We don’t hold any brief for Sikhs for Justice. However, we strongly condemn the illegal arrest of the activists who were peacefully putting up posters for referendum. The Indian court’s judgement allowing peaceful propagation of any political movement upholds the right to speak and put up posters for self determination and even for a separate Sikh state.

We reiterate that SFJ’s referendum is a democratic exercise to know the will of people of Punjab whether they aspire to become independent from India, whereas, the real referendum would be held in Punjab either under the aegis of UN or with the consent of New Delhi. So we take exception that under the garb of referendum issue, Indian army chief has issued veiled threat to Sikhs.