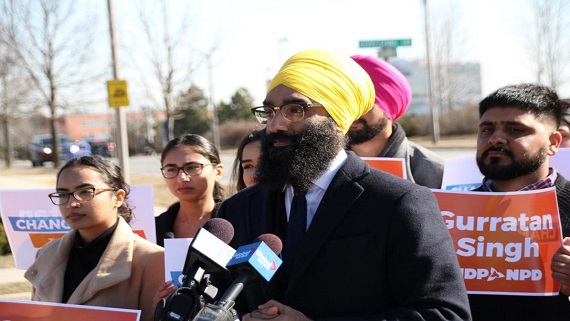 It was reported by the media sources that hundreds of supporters cheered on as the 33-year-old was nominated to contest from Brampton East. Given his brother’s hold on the community in the area, it was little surprise that this was a no contest.

The newly-created riding, as constituencies are called in Canada, includes much of Bramalea-Gore-Malton, the seat that Jagmeet Singh represented as a member of the provincial parliament. Jagmeet Singh had quit his seat after being elected NDP leader last October.

This isn’t Gurratan Singh’s first foray into electoral politics. He ran for the seat of Peel regional councilor in 2014 and narrowly lost to John Sprovieri.

“I know it doesn’t have to be that way. It’s time for universal pharmacare and dental care for everyone — and a premier that will deliver,” he further added while referring to referring to NDP Leader Andrea Horwath.

“Gurratan will be a fantastic representative for this riding and the people of Brampton, and I’m proud to have his voice be a part of our movement for change for the better in Ontario,” NDP Leader Andrea Horwath reportedly said.

“He’s a part of this community, and he knows how critical it is to tackle the issues that matter to Brampton families — like the overcrowding at Brampton Civic Hospital and sky-high auto insurance rates,” she further adds to her statement.