Amritsar: The SGPC appointed Jathedars, who took decision to announce pardon to controversial Dera Sirsa chief continue to work as “Jathedars” without any effective opposition. Notably Jathedars had been facing tough opposition from the global Sikh community after they had announced pardon to controversial Dera Sirsa chief for disrespecting Sikh Guru Sahib and violating the Sikh tenets. The so-called pardon was later withdrawn by Giani Gurbachan Singh in wake of such opposition.

A meeting of Jathedars was held at Akat Takhat Sahib secretariat on Dec. 14. As per information the management of the UAE gurdwara, where an amended ‘ardas’ was recited recently, tendered an apology to the Akal Takht Sahib which was discussed during the meeting. 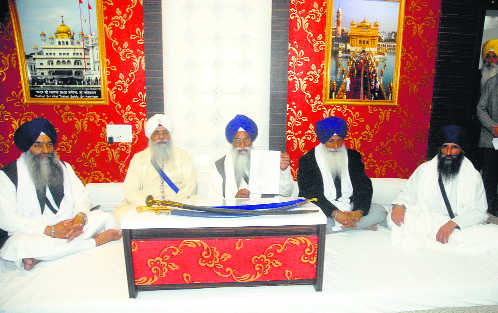 The meeting was not attended by Takht Sri Hazur Sahib Jathedar Giani Kulwant Singh or any of his representatives, while Giani Gurbachan Singh, Giani Mal Singh, Giani Iqbal Singh and Takht Giani Gurmukh Singh were present in this meeting.

Surjit Singh, president of Awir Gurdwara Sahib, Dubai, emailed the clarification and the apology to the Akal Takht, adding the blunder was committed in his absence.

Giani Gurbachan Singh told media persons that they had received the apology and that the decision would be taken in the next meeting of the Takht heads.