Jathedars did not act on behalf of Sikhs to exonerate Gurmeet Ram Rahim: says GSC

London: The Global Sikh Council (GSC) has condemned the decision of jathedhars to exonerate Gurmeet Ram Rahim of Dera Sacha Sauda, Sirsa for causing gross offence to Sikhs. Gurmeet Ram Rahim is guilty of causing offence to Sikhs by impersonating Guru Gobind Singh ji. GSC said in a statement that was issued on September 29 that Politically appointed jathedhars have no authority to dictate to, or act on behalf of, the wider Sikh community.

GSC said that all Sikhs should be aware that the SGPC, who appoint jathedhars, was created by the British government to manage the financial affairs of the historic Sikh gurdwaras and nothing more. The composition of the SGPC is based on political allegiances and not on a commitment to follow the Gurus; teachings. 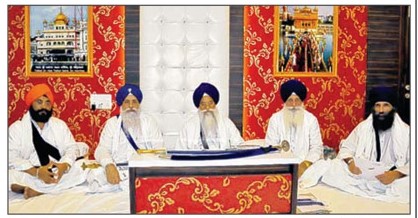 Over the years, especially after 1947, the SGPC has been dominated by political groups and is being used to further the personal interests of local politicians. During this time it has arbitrarily created figures of supposed authority over Sikhs worldwide, like Jathedhar of the Akal Takht, and the absurdity of politically appointed Jatehdars.

The GSC has urged all Sikhs to condemn the arbitrary decision of Jathedhars to exonerate Gurmeet Ram Rahim Singh and further urges Sikhs worldwide, to support the GSC in its aim of ensuring panthic decisions are predicated on the teachings of the Gurus and not on questionable political allegiances.