J&K Govt To Book Cross-Border Shelling Victims Under ‘Sedition’, Had Criticised BJP For ‘Abandoning’ Them

Jammu: Bizarre, but true the Jammu and Kashmir government is gearing up to book victims of border shelling for ‘sedition’ following their outburst against BJP leaders for “abandoning” and not assisting them at the crucial time as promised by the party before assembly elections. 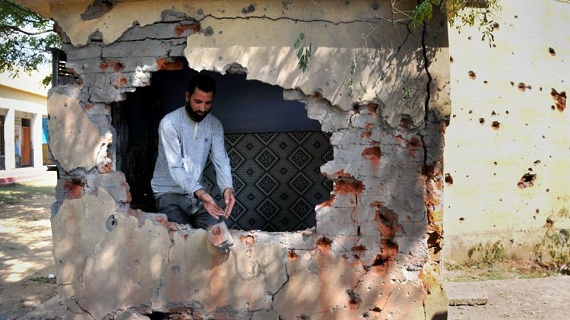 A civilian inspecting damage to the building through mortar shelling. (Image for representation)

Appalled, it is reported by the media sources that the local police are collecting evidence to book grieving sons of a deceased ex-serviceman who had criticised the ‘pro-hindutva’ party leadership for treating border residents as “cannon fodder to reap political benefits”.

Overcome by grief, the deceased’s sons Punit and Prashant reportedly cursed the BJP leadership while regretting they had voted for the BJP that had promised to restore peace and tranquility in border areas.

“We have reports that some persons raised anti-national slogans at the cremation. We have taken note of it in the DDR (daily diary report), ” reads the quote from the statement of a police official published in The Tribune (TT).

Moreover, it is widely said that such a humiliation at the hands of border residents and incompetence of the party itself has infuriated the BJP leadership because of which it has resorted to the use of sedition in order to crush the dissent in Jammu area.

It is notable that its a paramount duty of the government to take care of security and welfare of its people and secondly it is the right of the people to criticise the government for its failure to deliver on the promises made to them.