Srinagar: As per the media reports the chief minister of Jammu & Kashmir Mehbooba Mufti here on Sunday at the inaugural ceremony of the Chenani-Nashri all weather tunnel showered praises on Indian Prime Minister Narinder Modi for assisting and help her government in crushing the summer unrest of 2016 in Kashmir which lead to the death of more then 100 innocent civilians of the valley. 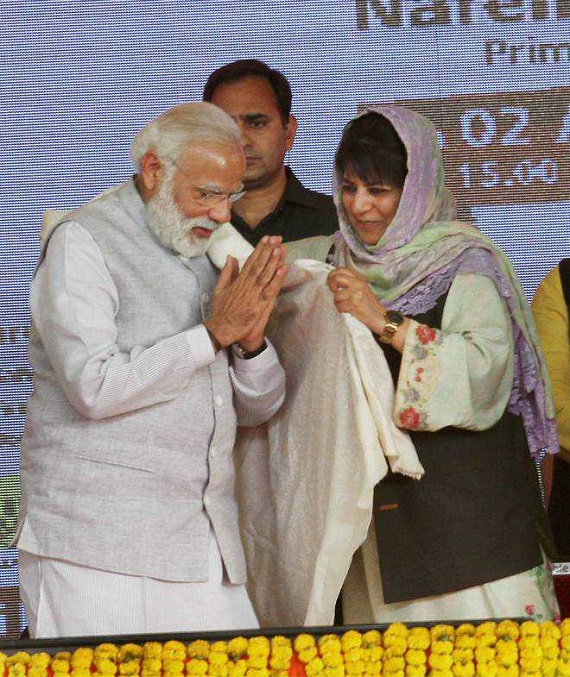 The Prime Minister of india being offered a shawl by Chief Minister Mehbooba Mufti during a rally in Udhampur on Sunday. A Tribune Photo

Flattering Narender Modi for his leadership and determination, she termed him a strong leader who could take bold decisions. “Last year was not good for the state. I am thankful to the PM who kept Home Minister Rajnath Singh with us during the difficult times. I alone couldn’t have done anything and it was due to your support that the situation today is under control.” reads a quote in an English vernacular.

It is widely the believed that the help about which the CM was pointing out her came in the form of pallet guns provide by the Indian Government to the state government which lead resulted in death and permanent blindness of hundred’s of protesting Kashmiri civilians during the unrest of 2016.

“I am happy that you are a strong person and you do whatever you commit,” the CM said while flattering the Indian PM for the UP elections win.

Speaking about the inauguration of India’s longest road tunnel at Udhampur today, she said, “The tunnel will not only cut distance but will also bring Kashmiri people closer to India.” “I am hopeful that you will help in making a new J&K and bring the state out of trouble,” Chief Minister Mehbooba Mufti was quoted saying from her statement by The Tribune (TT).