Amritsar Sahib: As per the media reports the Shiromani Gurdwara Prabandhak Committee (SGPC) has hired experts to preserve the “saroop” of Shri Guru Granth Sahib that was kept in the sanctum sanctorum of Darbar Sahib during military invasion of the complex in June 1984. 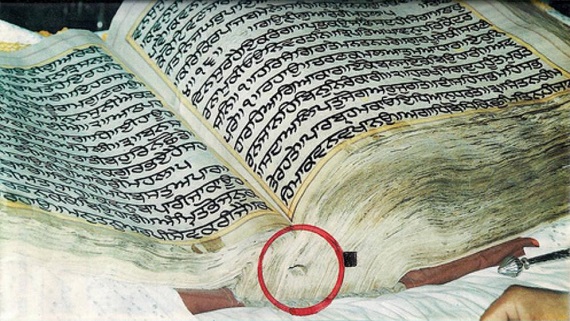 The  the conservation of the “bir” of Shri Guru Granth Sahib was reportedly undertaken by experts today and the task will be handled by the supervisory panel designated by the apex body. SGPC’s chief secretary Dr Roop Singh said the “saroop” suffered major damage on its cover and 290 “angs”  were also hit.

A specially designed paper had been arranged from overseas which would be pasted on the damaged portion of the “angs”. This paper would blend with the original page in such a manner that it would be hard to locate the impairment. Earlier, a saroop dating back to 1921 which was also “injured” during the British era was preserved through the identical technique a few years ago, reads the statement of Dr Roop Singh published in an English vernacular.