“The page was created to share community updates and ‘awareness messages/information’. It was initially accessible in India also” a representative of June 1984 Movement told Sikh Siyasat News.

“But now the page is blocked in India” he added. 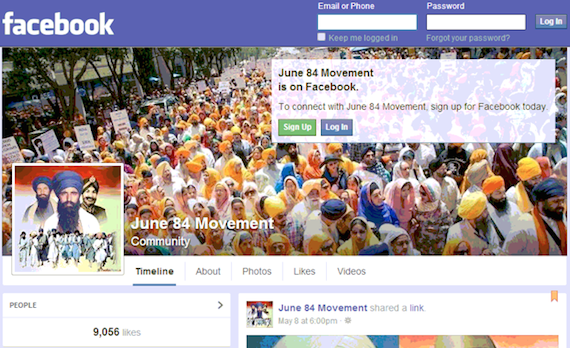 It is notable that Indian government has also blocked Facebook page of another US based groups named Sikhs for Justice (SFJ). SFJ is a human rights and advocacy group that had filed lawsuits against Indian politicians and government officials, including present Indian PM Narendra Modi, for their (alleged) involvement or connivence at “mass human rights abuses” and atrocities against minorities in India.

It is pertinent to mention here that the SFJ had organized massive protests against Indian PM Narendra Modi during his recent visit to Canada, but the news in this regard was totally blacked out by Indian media. After that it was found that the Facebook page of Sikhs For Justice was also blocked in India.

It is notable that these pages “Sikhs for Justice” and “June 84 Movement” are accessible outside India.