Washington, DC: “We should use this moment when the world is paying attention to India,” said Sunita Viswanath as she joined a panel of academics, attorneys, and activists at a US capitol briefing on the delay and denial of justice for state-sponsored massacres of Indian minorities. 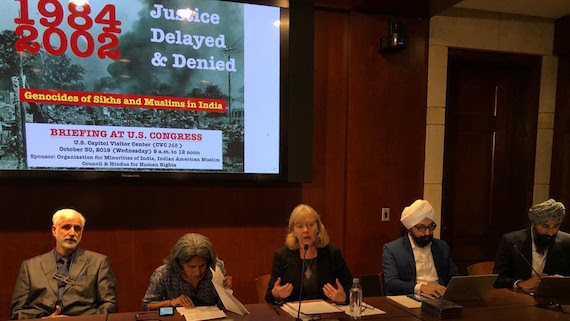 Panel members during the briefing at US Congress

Hosted on the eve of the 35th anniversary of the 1984 Sikh Genocide, the October 30 briefing focused on that atrocity as well as the 2002 pogrom of Muslims in Gujarat. Speakers, however, repeatedly emphasized that the real issue is a systemic, nationwide problem of impunity for those who commit communal violence. “We call for a complete overhaul of the criminal justice system,” said Viswanath, the co-founder of Hindus for Human Rights.

Her call was echoed by other speakers. “Generally speaking, it is widely believed in the United States that, even if the politicians in India are corrupt, partisan, and now increasingly bigoted and sectarian, at least India has a highly responsive judicial system that is fair and quick to dispense justice,” said Pawan Singh, a director of Organization for Minorities of India. “We are gathered here today to demolish that myth…. The Indian judicial system has actually proven itself to be no less partisan and subject to manipulation and abuse in order to protect the perpetrators of crimes of religious hatred.”

“Officials do not hold private individuals accountable for the communal violence,” explained Jennifer Prestholdt, the deputy director of The Advocates for Human Rights. “Courts don’t hold the government officials accountable for sanctioning and, in some cases, promoting and encouraging individuals to commit the violence. Political parties rally behind political leaders who are implicated in communal violence. Within the investigation and court systems, there’s obstruction of justice and witness intimidation that’s very commonplace in India. Immunity laws such as was described in Jammu and Kashmir shield security forces from any kind of accountability. Throughout India, officials accept torture and extrajudicial killing as the norm. So, unfortunately, all of this impunity continues to fuel communal violence.”

Speaking about the 1984 Sikh Genocide, in which approximately 3,000 Sikhs were killed, Singh explained, “In massacring Sikhs in a terrifying spree of violence, not only have those guilty never been punished, but their leaders rose to political prominence for decades. One of them is Kamal Nath, who is now the Chief Minister of India’s Madhya Pradesh state.” Describing the 2002 Gujarat Pogrom, he continued, “Sectarian Hindu mobs similarly went on a rampage across the Indian state of Gujarat, killing Muslim men, women, and children in retaliation for a fire in a train that had killed 59 Hindus, many of them connected with a movement to build a temple in place of a mosque that Hindu extremists had demolished in 1992. Instead of prosecuting the perpetrators of the Muslim massacres, the Gujarat government connived from the very beginning to protect the perpetrators. The man who headed the state government continues to be himself accused of ordering the police to stand down and allow the Muslim massacres. He was denied a visa to enter the United States for nine years. He is now India’s prime minister, Narendra Modi.”

“I started believing that this democracy is a deception,” said Rajvinder Singh Bains, an attorney who pioneered a string of public lawsuits against Indian officials accused of custodial torture and enforced disappearances. Discussing the pursuit of justice for the 1984 genocide, he remarked, “We know the government did nothing. They set up a commission of enquiry. When a massacre happens, what do you do? You start prosecuting. You start catching guilty. Witnesses are available. You start trials. You start punishing them. That’s a normal, usual response. What happened in this particular case? No, no, we will have a fact-finding enquiry. One, two, three, four. Till 2014, you had commissions of enquiry. For 35 years, you’re trying to find out what happened when everyone knows what happened. But no punishment. No trials.”

“Not only the acts of extrajudicial killing, and torture, and some of the other things that have been described, but the impunity — the lack of a government response to hold people accountable for those human rights violations — is, in addition, a human rights violation,” commented Prestholdt.

Viswanath suggested that the US needs to shift its perception of the Indian judicial system. “Time and time again, American diplomats, officials, politicians, journalists, academicians — they make the claim that, while it is true India has had a lot of religious violence and persecution, the victims can get swift and fair justice thanks to what is roundly called a free judiciary,” she stated. “That, as we have heard today from various speakers, is not true…. It speaks of a total failure of India’s criminal justice system that, not only do a majority of the guilty go unpunished, they actually get promoted and rewarded.”

“Minorities in India and their fundamental rights have never been respected,” explained Sukhman Dhami, co-founder of Ensaaf. “I don’t want to make this a discussion of historical events and facts, however, because I don’t believe that this is in fact history…. The events of 1984 in June and November were not isolated incidents, but rather these were atrocities that represented the beginning of a decade of atrocity crimes targeting the Sikh community…. The atrocity crimes committed against Sikhs are part of an even wider context of atrocity crimes committed against minorities throughout India.”

Viswanath, who delivered the concluding presentation, described how the delay and denial of justice is “a fate not limited to Sikhs and Muslims.” She discussed how Adivasis (tribals), Dalits (former untouchables), Christians, dissenters, rationalists, whistleblowers, and a wide-range of others also endure travesties of justice. She highlighted cases like the 2006 Khairlanji massacre of Dalits and the arrest of Soni Sori, an Adivasi schoolteacher who was tortured and raped by police in 2011 after false accusations of supporting Maoist insurgents. She also discussed the 2018 arrest of Sanjiv Bhatt, a Gujarati police officer who accused Modi of ordering police to allow Hindu mobs to kill Muslims. She further mentioned last year’s arrest of five human rights activists falsely accused of inciting caste-based violence — Sudha Bharadwaj, Gautam Navlakha, Vernon Gonsalves, Arun Ferreira, and Varavara Rao.

“Those who raise these issues are called anti-India and anti-Hindu,” warned Viswanath. “We stand for the truest value of India and Hinduism. That’s pluralism…. We in the United States have the privilege of being able to speak truth to power without fear of violence and oppression. It is vital that those of us who can speak, do speak, and never stop speaking until democracy and justice for all are restored to India.”