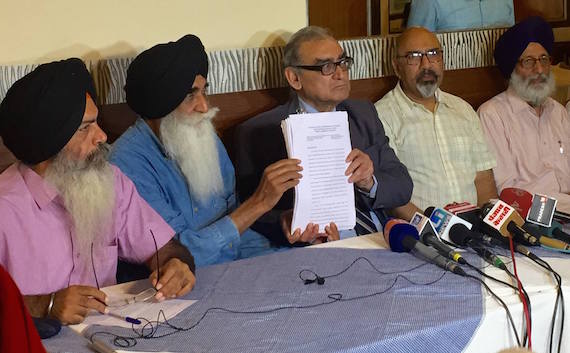 Copies of a press note, along with findings of the the Commission were given to the journalists during the press conference. The press note released on the occasion reads as follows:

Justice Katju Commission of Enquiry was formed at the request of some Human Rights organization to enquire into the incidents of 14th October, 2015 at village Behbal Kalan and Kokaputra, Faridkot, Punjab, in which two persons were killed and several others injured due to Lathi Charge and Firing by the Punjab police and property was damaged. Although the Punjab government has also set up a commission of enquiry into the matter but there was general lack of confidence in this ‘official commission’ and hence the request for the formation of this ‘People’s Commission’. Thus, the purpose of this ‘Peoples Commission’ is to investigate into the aforesaid incidents, record its findings and put them in the public domain for the people to know the truth.

Mr. Justice M. Katju, a former Justice of the Supreme Court of India, the Chairman of the Commission,accompanied by a large number of individuals as also members of Bhatinda Bar Association visited the spot of Police Action at Behbal Kalan on 30th January, 2016 for site inspection. Thereafter on 31st January, 2016, The Commission again visited the said village and held its formal sitting in the premises of the local Gurudwara.

The Commission ensured that prior notices were issue to authorities of the Punjab Government i.e. the Chief Secretary, Home Secretary and D.G.P, inviting them to appear, either personally or through their representatives, before the Commission but unfortunately, they neither responded not any of their officials appeared before the commission. In the morning of 31st January a notice was again sent to Sh. Amar Singh Chahal, D.I.G. Faridkot who is also a member of the SIT formed by the State Government to look into the matter. This procedure was adopted to strictly to comply with the rules of natural justice, which requires that both sides should be given opportunity to be heard. However, despite our giving ample opportunity, no representative either of the State Government of Punjab or of the police department appeared before us. The Commission was therefore constrained to proceed in their absence. In course of the press conference held at Bhatinda, on Feb 1, 2016), this Commission again announced that ‘doors’ of this Commission shall remain open for about a week (till 7/02/2016). The Commission delayed its report hoping that the Government will response but it is unfortunate that despite subsequent telephonic enquiries from the office of the Chief Secretary Punjab, no attempt has, till now been made by them to co-operate with this Commission. It equally painful that despite it being an open and shut case, the Commission appointed by the Punjab government has also made no headway till now.

It is still more painful to note that no headway has either been made in the deplorable, painful and shameful incidents of desecration of Holy Shri Guru Granth Sahib at several places in the month of June 2015

Anyhow 37 witnesses presented their affidavits at Behbal Kalan. Instead of merely relying upon the affidavits, these witnesses were thoroughly examined before taking their testimony on record. Several other witnesses and victims also chose to depose before the commission and were examined accordingly. This process was adopted to ensure the credibility of witnesses and not to accept their statements blindly.

All affidavits and statements were divided into three broad categories to facilitate in-depth examination of each of them:

1- Statements of relatives of those who had lost their lives in the unfortunate incident of police firing.

2- Statements of individuals who had received bullet injuries in the said police firing.

3- Statements of those individuals who received blunt injuries in police lathi charge and whose property was destroyed in police action. This category also includes persons who were target of police action in any other related way and had directly suffered.

Following are the details under each of these heads:-

It is unfortunate that no follow up action was taken by the authorities. However keeping in view public outrage a FIR No.130 dated 21.10.2015 was registered at P.S Baja Khana under Sections 302/307/34, & 25/27/54/59 Arms Act. This FIR was lodged on the basis of letter bearing No.318/PA/DIR/BOI dated 21.10.2015 from the Director Bureau of Investigation-cum-Chairman Special investigation Team Punjab, Chandigarh to the Senior Superintendent of Police Faridkot. Unfortunately it appears that with a view to hush up the matter the FIR names only some unknown persons as culprita. It also refers to an order No.1306/Crime-E-3 dated 14.10.2015 of the Director General of Police, Punjab declaring constitution of a Special Investigation Team headed by Sh. Iqbalpreet Singh Sahota, IPS, Director Bureau of Investigation Punjab with Sh. Amar Singh Chahal I.P.S D.I.G, Ferozepur Range Ferozepur and Sh. R.S. Khatra, IPS, D.I.G. Bathinda Range Bathinda as members. The FIR further states that the SIT had ‘gone to Faridkot’ on 16.10.2015 to take stock of the situation regarding firing at village Behbal Kalan. No headway appears to have been made in the case. There is no information regarding any progress or case diaries. There is hushed silence from the side of the government.

Those injured in the police firing as also in lathi charge stated that the police action was unprovoked and sudden. The injured included some women and even children who deposed vey vocally. It is shocking that apparently there was no magistrate present on the occasion and this formality was completed later on. Police is reported to have fired on unarmed and peaceful congregation hiding behind the pillars of a brick structure used as a bus shelter and also from behind a tractor trolley which was over turned and used as a ‘Morcha’, a shield. It was like police was firing at an enemy crowd. From the testimony of witnesses it further appears that the police party which fired was led by Sh. Charanjit Singh, S.S.P. Moga and SHO Baja Khana.

There were some uncorroborated statements given by some witnesses which claimed that the police action was ordered the moment some mobile phone call to the S.S.P. ended. The timing of the call should be a matter of record with the telecom company and taken cognizance there of by the official commission.

This commission, as such, holds Punjab police guilty of excessive and unprovoked action against a peaceful congregation and of using brutal police force including lathi charge and firing without reason and without the statutory magisterial orders which need to be passed on the spot itself.

Since there is a lurking suspicion that the police action was ordered following the telephonic orders from someone higher up who was trying to controls the situation through remote control, this Commission would like to quote the decision of the Supreme Court of India in the case of Parkash Kadam Versus Ram Parkash Gupta (2011), in which it was held that a fake encounter (read firing by implication) by the police even on direction of his superiors amounts to murder and those police men who commit the crime may face death penalty.

This Peoples Commission would also like to warn the police and administration from using their pressurizing and intimidating tactics to force people of Behbal Kalan and neighbouring areas ‘into submission’.

Procedure adopted in respect of the Kot Kapura incident was the same as in case of the Behbal Kalan. In case of Kot Kapura, unlike Behbal Kalan, not too many persons came up for hearing / deposition. However some prominent and well known Sikh religious leaders and pracharaks deposed on free will and accord and got their statements recorded. They included Giani Kewal Singh, a prominent Sikh scholar and religious leader, Bhai Panth Preet Singh, a well known pracharak, Bhai Bhaktora Singh, Bhatinda, a well known Sikh religious preacher and Satnam Singh S/o Mangal Singh, resident of village Chander, Dist Ferozepur, Punjab.

In case of Kot Kapura incident aswell witnesses deposed that the police action against the peaceful protestors was sudden and unprovoked. In this case as well, despite written notices, no State or police authority cared to appear before the Commission to provide their version. Circumstances, circumstantial evidence and statements were enough to convince the Commission of illegal and arbitrary nature of the police action. Police firing is an extreme measure to be resorted to and that too only in very rare and exceptional circumstances. This, the Commission feels, that the police action was totally uncalled for and unjustifiable. We are living in democracy and people have right to protest and assemble peacefully without arms as provided for in Article 19 of the Indian Constitution. The crowd assembled at Kot Kapura was also, like Behbal Kalan, unarmed and peaceful. They had neither committed any violence nor threatened it. Therefore, it was just no occasion for the police to resort to such an extreme step as firing with live bullets.

It has also been brought to the notice of this Commission that the place where people had assembled peacefully and where uncalled for police action was staged is under electronic surveillance from all sides. The control room is located in the nearby police station. The C.C. T.V footage can bring the truth out. This commission hopes that the police does not temper with this important piece of evidence which may be called for in an appropriate court of law or forum. This commission would as such warn the police not to temper with this evidence and not to try pressurizing the witnesses, as has been brought to the notice of this Commission.

In this case also, the Commission would like to quote the earlier mentioned decision of the Supreme Court of India in the case of Parkash Kadam Versus Ram Parkash Gupta (2011), in which it was held that a fake encounter (read fake action, by way of implication) by the police even on direction of his superiors amounts to murder and those police men who committed the crime may face death penalty.