Bengaluru: In the midst of current ‘one nation’ narrative discourse being carried out by the pro-hindutva forces at the helm of the affairs in the Center, the Congress lead government in Karnataka here on Tuesday constituted a nine member committee to design a ‘state’ flag — an identity symbol unique to the state — and submit a report on giving it legal feasibility. 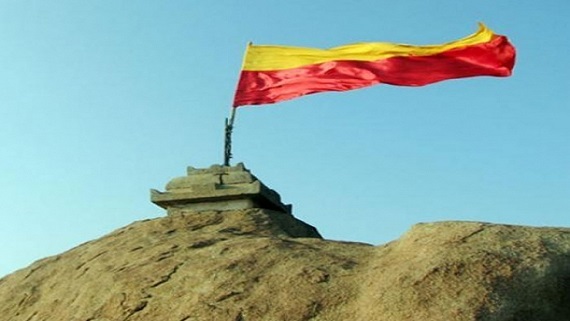 If the state goes ahead with its move it will become second state in India after Jammu & Kashmir to have its distinct ‘state flag’. The  state  enjoys special status under Article 370 of the Indian  Constitution.

The proposal came at the time when the state is due to go on election next year, this is not the first time that Karnataka has introduced such a proposal as back in 2012 during the BJP lead government the state had adopted the similar motion. But in its reply filed with the Karnataka High Court the state government said that  it had not accepted suggestions to declare the red-and-yellow Kannada flag the official state flag, as a separate flag would go against the supposed “unity and integrity of the country”.

While in interacting with Times of India (ToI), the then then Kannada and culture minister Govind M Karjol had said: “The Flag Code does not allow flags for states. Our national flag is the symbol of integrity and sovereignty of our nation. If states have their separate flags, it could diminish the importance of the national flag. Besides, there are possibilities of it leading to narrow minded regional feelings.”

It is believed by many that the  Siddaramaiah government is mooting a separate flag for the state, coinciding with pro-Kannada voices denouncing the alleged imposition of Hindi in the state. Former Karnataka chief minister and Union minister D V Sadananda Gowda dismissed the move, claiming that, “India is one nation and there cannot be two flags in one country.”

As reported by the English vernacular the June 6 government order has nominated principal secretary of the Kannada and culture department as chairperson of the committee. The order, signed on behalf of the governor by G Annapurna, under secretary of the Kannada and culture department, reads: “The committee must ready a design for a separate state flag and submit a report on providing it a legal sanctity.”

Furthermore, the order reportedly said that the committee has been set up against the backdrop of representations from Karnataka Vidyavardhaka Sangha president Patil Puttappa and activist Bheemappa Gundappa Gadada from Belagavi.

“The Constitution provides states supremacy in their own sphere and even a seven-judge Supreme Court bench has upheld this. The flag code also has no restrictions on this matter, former advocate general of Karnataka Ravi Varma Kumar said.