Jalandhar: While Punjab minister Navjot Singh Sidhu was continuously facing flak for hugging with the Pakistan Army chief at newly elected Pakistan Prime Minister Imran Khan’s swearing in ceremony, the Dal Khalsa slammed political class for focussing on messenger instead on the message.

The message that the messenger Sidhu has carried from west Punjab to east Punjab was the long standing demand of Sikhs to have a free walkway corridor (bridge) from Dera Baba Nanak to Kartarpur Sahib about 4 km into Pakistan beside peace between two hostile nuclear countries. 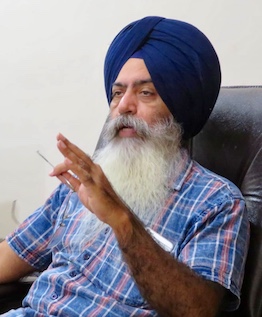 Dal Khalsa secretary for political affairs Kanwar Pal Singh while acknowledging the support of the Pak establishment to all Sikhism related activities, said political wisdom is to discuss and concentrate on “the message of the Pakistani establishment and find ways to make it a reality”.

He asserted the upkeep of Nankana Sahib and other shrines and the formation of the Pakistan Gurdwara Parbandhak Committee in the Islamic Republic of Pakistan in April 1999 was a remarkable feat and a true example of Sikh-Muslim affinity.

He further said the demand for Kartarpur Sahib Corridor was first raised in 1998 to enable Sikh pilgrims to have freedom to visit Gurdwara Kartarpur Sahib without visa or passport.

“We believe that the Pakistan government is open to the idea since 1998, whereas India is dillydallying for the last nearly two decades despite pleas and protests by Sikh Nation. We have strong doubts that whenever Pakistan government under Imran Khan will officially come up with the proposal to build corridor to mark 550th anniversary of Guru Nanak Sahib in 2019, India will not respond positively”, he said.

He pointed out Sikh devotees have been praying every month at the border facing towards Gurdwara Kartarpur Sahib in Pakistan for the last several years.