Srinagar: In a strong reply to the statement of Indian Army chief, General Bipin Rawat, wherein he has said that freedom of Jammu and Kashmir is inconceivable and called for dealing harshly with people protesting during operations against Kashmiri freedom-fighters, Chairman Hurriyat Conference, Syed Ali Geelani said it is nothing but their power of arrogance and it illustrates their tyrannical mindset. On Saturday while addressing the media persons at Hyderpora, Syed Ali Geelani said that it clearly proved that India is an autocratic state that believes in its military might & are desperate to suppress the freedom sentiments of people in state.

Terming the approach of Indian leaders on the issue of Kashmir as unrealistic, Syed Ali Shah Geelani said that their shrived policies has never helped in past nor it will deliver any good in future. The people are striving for freedom and pursuing their right to self-determination. They are not thoughtless instead people believing in military might and those who believe that they can deter us from our mission are living in fool’s paradise. 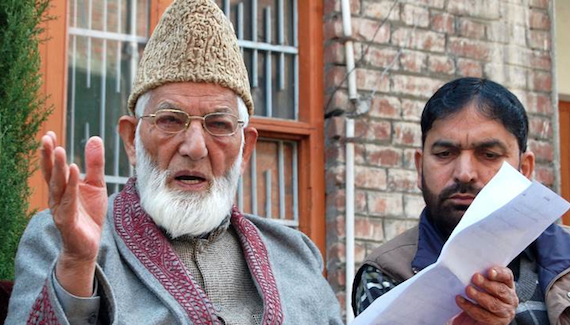 While quoting the former army Chief Hooda he stated that the military establishment like him must understand the Kashmir is a political problem and not a law and order issue.

Further referring to the statement of ex-army chief General Huda, Syed Ali Shah Geelani said that he during his tenure & after his superannuation, admitted that Kashmir is political issue and rejected the idea of using harsh measures for its resolution.

Whilst countering the statement of General Rawat he said that it is simply a routine practice to appease their top political stalwarts as he was promoted out of turn. Syed Ali Geelani said that Kashmir is not a law and order problem and nor it can be resolved through military might.

We are striving for its resolution since last seventy years and world community acknowledges its historical background. Three full-fledged wars between two countries were fought, said Syed Ali Shah Geelani and even now people in south Asia are facing harsh difficulties because of this burning issue he was quoted saying on his party’s official website.

Furthermore he added that it is the stubborn approach of Indian authorities is creating hurdles in its peaceful resolution.

Apparently, in his statement he reportedly said that General Rawat and his masters to accept ground realities, honour people’s aspirations. Sayeed Ali Shah Geelani asked to shun their colonial and autocratic approach and said that it will pave way for peaceful resolution of Kashmir issue.