Chandigarh: As per the media reports the Aam Adami Party’s (AAP) Punjab unit chief Bhagwant Mann has resigned from his post. It is widely seen as an aftershock for AAP’s Punjab unit, after its party convener Arvind Kejriwal on Thursday, tendered a written apology to Bikram Majithia over publicly denouncing him for his alleged connivance in the drug cartel  active in  the state.

“I am resigning as a president of AAP Punjab… but my fight against drug mafia and all kind of corruption in Punjab will continue as an “Aam Aadmi “of Punjab,” reads the quote from his tweet. 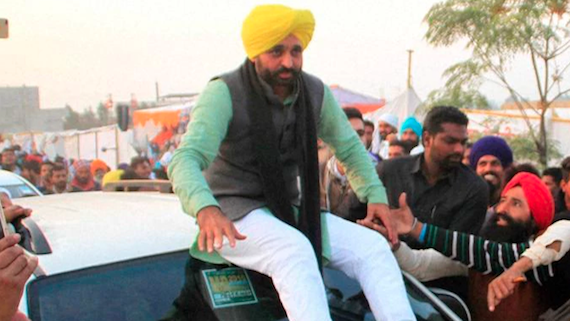 Yesterday, Delhi Chief Minister and AAP leader Arvind Kejriwal in a reported letter retracted his allegations that former Punjab minister Bikram Majithia was involved in drug trade and apologized to him.

The apology has provoked a sharp backlash with the Aam Aadmi Party. A top AAP leader in Punjab called the retraction by the Chief Minister a “meek surrender” and another blamed him of letting down the people. Kumar Vishwas, AAP’s sidelined leader too appeared to join them with a tweet yesterday that was seen to taunt Arvind Kejriwal, notes NDTV in its report.

“Many people are unhappy (with Arvind Kejriwal’s apology). I hope justice will be done as people like BS Majithia deserve to be in jail,” reads the statement of AAP’s Member Parliament Sanjay Singh published in an English daily.

Furthermore, while reacting over the reported apology letter SAD (Badal) leader Harsimrat Badal stated that the letter of apology written by Arvind Kejriwal has exposed the “cheap politics” and the false propaganda unleashed by him in the state.

“We’re appalled and stunned by the apology of Arvind Kejriwal tendered,” Sukhpal Singh Khaira, Leader of Opposition in the Punjab assembly reportedly said on Thursday, making it clear that the state unit wasn’t in the loop. “We don’t hesitate to admit that we haven’t been consulted on this meek surrender by a leader of his stature,” he adds.

“If you stand for truth, facing defamation cases is a way of life I am still facing defamation filed by Punjab cable mafia. Will fight it to the end,” AAP MLA from Kharar Kanwar Sandhu reported said in his statement.

Bikram Majithia had filed a criminal defamation case on May 20, 2016, against Arvind Kejriwal and AAP leaders Sanjay Singh (now a Rajya Sabha MP) and Ashish Khetan for linking him to the drug trade and tarnishing his image. The case is pending in an Amritsar court, notes Times of India (ToI) in its report.