London: The All Party Parliamentary Group (APPG) for British Sikhs will be sending a joint letter signed by dozens of MPs with large numbers of Sikh constituents to the Foreign Secretary following the virtual lobby yesterday.

The MPs will be asking for an urgent meeting on behalf of Sikh constituents to discuss Punjab Farmer Rights. Dozens of MPs representing Sikhs, including Ministers have already written individually to take up the issue with the Foreign Secretary.

Tanmanjeet Singh Dhesi the MP for Slough and and Vice Chair of the APPG for British Sikhs who excellently chaired the virtual lobby yesterday (October 28) will take the lead in getting MPs signed up and arrange the meeting.

Tanmanjeet Singh Dhesi opened the meeting and spoke about the impact of the controversial laws introduced by the Indian government. 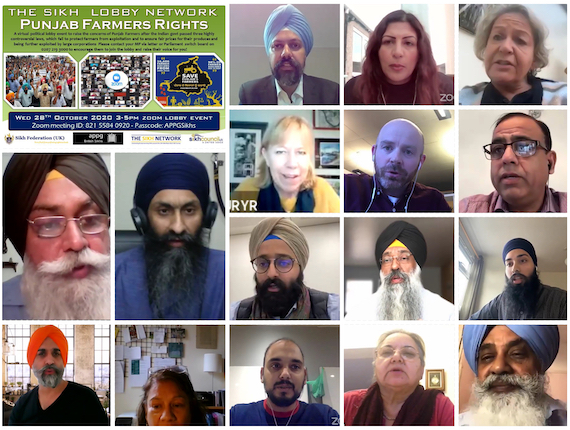 A Lobby with UK Parliamentarians was held on Punjab Farmers Issue on October 28, 2020

Speakers from the Punjab, UK, Europe and North America focused on the widespread concerns of Sikhs across the globe against ‘anti-farmer’ laws passed in India. Despite the COVID-19 pandemic there have been mass protests by farmers, especially in the predominantly Sikh state of Punjab and Haryana.

The two main guest speakers were from Punjab and provided an excellent insight into the issue and the wider context.

Ajaypal Singh Brar: A political activist and blogger with an avid interest in geopolitics and history of South Asia & one of the 5 member Committee leading the protest at Shambu.

Several speakers clarified the core issue for Punjab and the Sikhs was a historic and political one. The protests highlight the deteriorating relationship between States like Punjab and central government.

Many concluded the solution to this crisis lies in Punjab’s autonomy. However, the situation in Punjab is a ticking time-bomb with the authorities expected to use violence to suppress those raising their voices in protest based on past experiences.

Apart from Tanmanjeet Singh half a dozen other MPs spoke and another half a dozen had staff/researchers present. Other MPs that spoke at the meeting included:

Seema Malhotra, the MP for Feltham and Heston also participated. MPs who sent staff or researchers to attend on their behalf included

Ranjit Singh, the Deputy Mayor in Bobigny in France who highlighted how the issue impacts on Sikhs across the globe as they have family members involved in farming in Punjab

Dabinderjit Singh, the principal adviser to the Sikh Federation (UK) who spoke about the human tragedy of farmer suicides due to farmer debt and the new laws. He also spoke of the clash between States like Punjab and central government.

Manivjoyt Singh Dhillon, a member of the Executive Committee of the Sikh Council UK presented the results to date from their survey relating to farmers. This shows 92% of Sikhs in the UK have ties to agricultural land in India and 84% are personally concerned about the impact of the new laws. For Sikhs, land-ownership holds cultural significance interlinked with our faith and history. Another stark statistic is that 93% of respondents felt that human rights violations will increase following the mass protests by Punjabi farmers.

Others who spoke included Jas Singh, from the Sikh Network who were the co-hosts, Gurpreet Singh Anand the Secretary General of the Sikh Council UK, Balvinder Kaur Saund, the Chair of the Sikh Women’s Alliance, Jasvir Singh from Sikh PA and Bhai Narinderjit Singh, the General Secretary of the Sikh Federation (UK).