Kohnoor: Its between Sikh Nation & British Government and India has no locus standi: Dal Khalsa

Amritsar: Asserting that Sikh people were the only legitimate heirs to the Kohinoor diamond and many other artifacts and symbols of the erstwhile Sikh rule that adorns the museums in UK, the Dal Khalsa said neither the petitioner in the Supreme Court nor the government of India have any locus standi to claim the Kohinoor.

Party head H S Dhami, spokesperson Kanwar Pal Singh and SFHR chairman Advocate Harpal Singh Cheema said the British took its possession from Maharaja Duleep Singh under duress or by deceit at the fall of the Sikh empire. They said India or anyone else has no claim whatsoever to these remnants of Sikh glorious past.

Whatever its origin, the Sikh claim of ownership was based on the fact that the priceless jewel was given to Maharaja Ranjit Singh by Shah Sooja in 1813 as a prize reward for helping him in his hour of need after Shah was ejected from Kabul by his brother Mehmud. Since then Kohinoor became legitimate heritage of Sikh Kingdom till the so-called gifting of the same was managed by British chicanery, they claimed. 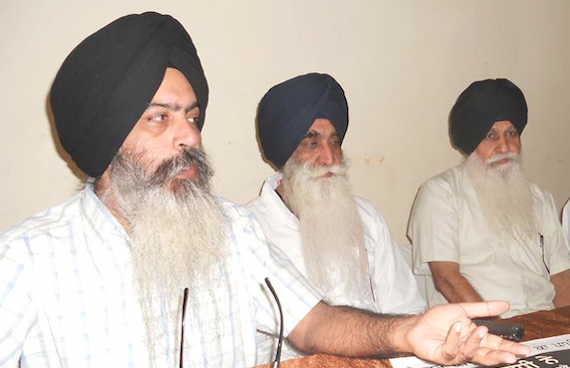 Kanwar Pal Singh said Sikhs, who are its rightful owner, should oppose any move that could land the diamond in the possession of New Delhi. “Given our experience with India which has neither documented nor displayed nor even acknowledged the rare manuscripts and religious artifacts looted by its army and agencies after the attack on Darbar Sahib in June 1984, Sikhs feel that the diamond was safer in British hands than India”, said he.

The leaders were of the view that even the SGPC, which is a statutory body to manage the affairs of Gurdwara’s in Punjab and neighbouring states can’t represent the collective will of the Sikh Diaspora.

“Its present management was in wrong hands. The hands and minds that controls and runs its affairs are aligned with right wing ruling Hindutva party”, said Dhami and added that for the moment, status quo anté was the best option for the Sikh people.

Advocate Cheema urged Sikh population in UK especially Federation of Sikh Organizations (FSO) to convey to the British government that the Sikhs would deal with them on the matter once they regain their sovereign rule, whenever.

Those who see this as far-fetched thought, may know that the wheels of history sometimes turn faster than expected. Our right to a sovereign Punjab is historic and non-negotiable, said the hardliners.