Kotkapura/ Faridkot: Kotkapura police has registered an FIR (number 192, dated 14 Oct. 2015) against Sikh preachers and the Sikh sangat in relation to yesterdays Kotkapura incident. A copy of the FIR is available with the Sikh Siyasat News.

Who are booked by the police: 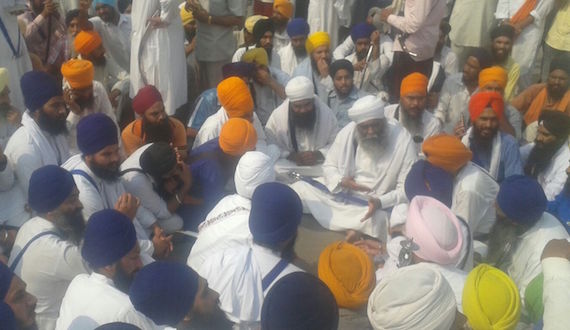 What are the charges:

The FIR is registered on the complaint of Kotkapura city Police station SHO Gurdeep Singh under section 307 (attempt to Murder), 353 (Assault or criminal force to deter public servant from discharge of his duty), 332 (Voluntarily causing hurt to deter public servant from his duty), 333 (Voluntarily causing grievous hurt to deter public servant from his duty), 382 (Theft after preparation made for causing death, hurt or restraint in order to the committing of the theft), 435 (Mischief by fire or explosive substance with intent to cause damage), 283 (Danger or obstruction in public way or line of navigation), 120-B (Criminal Conspiracy), 148 (Rioting, armed with deadly weapon), 149 (Unlawful Assembly) of Indian Penal Code, u/s 25, 54, 59 of Arms Act and u/s 3 and 4 of Prevention of Damage to Public property Act 1984.

Police of 7 Districts was deployed at Dharna spot:

The FIR reveals that the police force of Kotkapura, Faridkot, Bathidna, Mansa, Mukatsar, Firozepur and Fazilka was deployed at Battian Wala Chowk, Kotkapura where the Sikh sangat was staging a protest sit-in since October 12, 2015 demanding arrest of persons responsible for sacrilege of Guru Granth Sahib at Bargari village.

FIR says that the protesters were causing inconvenience to flow of traffic. It further states that meetings were held to convince Sikh leaders to lift the sit-in protest and let the traffic flow. It says that when demonstrator did not agree to lift the demonstration they were issued waring from loud speaker.

FIR also lists numbers of police vehicles damaged in this incident. FIR accuses demonstrators for violating the peace and says that lathicharge, shot of teargas and water canon was used allegedly as last resort.

FIR Alleges Snatching and use of SLR:

No mention of Sikhs injured in Police Action:

There is no mention of Sikhs injured in police lathi-charge, tear-gas firing, use of water-canon and gun fires by the police.

No mention that police deliberately caused damage to Sikhs’ vehicles:

Eyewitnesses and victims of Oct. 14 police action have rebutted police accusations levelled in the FIR. They say that the situation was deliberately provoked by the police that unleashed repressive tactics against peacefully demonstrating Sikhs.