Faridkot/ Ludhiana: Several Sikhs have sustained injuries, including bullet injuries, in police crackdown against peacefully demonstrating Sikhs at Kotkapura. A Sikh youth form Bathinda, named Ajit Singh son of Avtar Singh, has sustained serious injuries due to police firing. Ajit Singh was reportedly hit by a bullet, supposedly fired by the police, in lower parts of the body. His condition is said to be critical.

Ajit Singh was referred to PGIMER, Chandigarh but his condition turned very critical while he was being transported to Chandigarh in an ambulance. 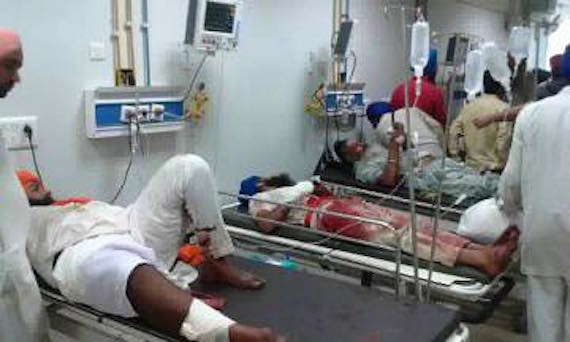 Others, who were injured in police firing, are being treated at Kotkapura civil hospital. Sources said that around sixty persons were admitted to civil hospital of Kotkapura, of which around fifteen persons were sent to Faridkot Medical College and Hospital as they had major injuries. As per information some police personnel have also sustained injuries. Exact number of injured persons was yet to be determined.