Kotkapura/ Chandigarh: Tensions currently prevail in Kotkapura town of Punjab after the Punjab police used force to disperse Sikh protesters who were demanding action against persons involved in sacrilege of Guru Granth Shaib.

Sources present on the spot of dharna told Sikh Siyasat News (SSN) over phone that at round 3 am the police and civil administration told Sikh pracharaks, who were leading the peaceful sit-in at Kotkapura chowk, to either end their protest or offer arrests. Sikh leaders and the Sangat refused to call off the protest as the police had failed to find and book persons involved in sacrilege of Guru Granth Sahib at village Bargeri near Kotkapura.

After holding discussions with the Sikh sangat and the administration it was decided that all present on the occasion would offer their arrests. The administration reportedly called three buses to take the protesters to jail but instead of taking them to the jail  the police dropped them in remote villages. 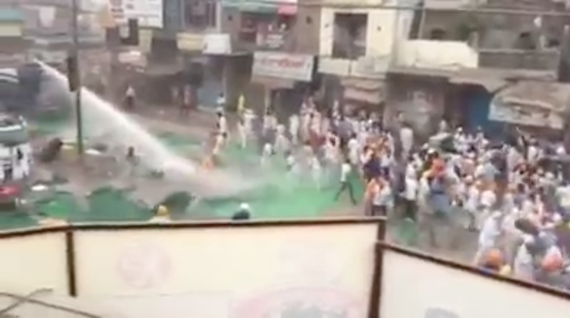 A still of police action against the Sikh sangat at Kotkapura

When the Sikh leaders came to know about the police’s deceitful tactic they refused to offer arrests and said that the dharna will continue. After which, at around 6 am, the police forcefully arrested Bhai Ranjiit Singh Dhadrian, Panth Preet Singh and other Sikh pracharaks and resorted to lathicharge against the Sikh sangat.

WATCH VIDEO OF POLICE ACTIONS AGAINST THE SIKH SANGAT AT KOTKAPURA

The police also fired tear-gas shells and used “Vajra” (Water Canon) against the Sikh sangat. The Sikh sangat reportedly reacted to the police action in strong terms and some persons also resorted to stone platting. Some police vehicles were also damaged in this incident.

According to latest reports the police has dispersed the protests and curfew like situation prevails in Kotkapura town. The administration has ordered all schools, colleges and many other institutions to remain closed. Arrested Sikh leaders were in police custody till the filing of this report.

NOTE: As per unconfirmed reports the police also resorted to gunfire and some persons sustained bullet injuries. Sikh Siyasat News is trying to reach out more sources to find the facts behind these unconfirmed reports and the reads will be updated on it shortly. (Last updated at 09:24 hrs IST – 14/10/2015).