KPS Gill’s “Punjab – The Enemies Within”: Bundle of Lies, Distortions and Subterfuge [Op-ED]

As age catches up, ex-DGP Kanwarpal Singh Gill alias KPS Gill, has come out with a book called “Punjab – The Enemies Within” in which he weaves a web of lies, distortions and subterfuge. The book is a joint venture of KPS Gill and Sadhavi Khosla.

When I picked up the book, I thought that at least at the fag end of his life, Gill may have done some soul-searching and made some frank and honest admissions, but that was not to be.

After reading the book, I can easily say that, “The so-called super cop of one small section of Punjab and “Butcher of the Sikhs” for another has spun not just half-truths but lies galore. The 47-page chapter penned by Gill is mainly one-way traffic dominated by biased views and distorted versions of every big or small event that occurred during those times.

As they say everyone has his own truths. It depends upon which side of the fence you are. Gill is surely on Delhi’s side and those who were part of the militant movement including myself represent the Sikh side.

Targeting me in a personal remark, Gill has accused me of having contacts with subversive and disruptive elements in the state and beyond. Obviously, the darling of the Indian state does not need to give proof, as if his words are gospel truth. Going further, he says that Dal Khalsa under Gajinder Singh tried to float a joint platform with the militants of Kashmir in 1997-98. Laugh it off as this is far from truth. I do not think I should say more than this to his wild accusations against my party and me. 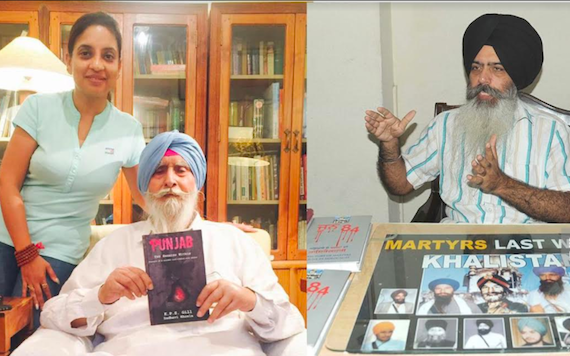 His narration of events borders on the absurd at many places in the book. He has wrongly blamed Bhai Fauja Singh for hacking off the arm of a Hindu sweetmeats seller on his way to the Nirankari convention on April 13 1978 and that he was shot dead because he attempted to kill the Nirankari chief Gurbachan Singh who was holding a satsang over there.

It is common knowledge that 13 devout Sikhs including Bhai Fauja Singh fell to the bullets of Nirankaris and the police on that day in Amritsar when they went to protest against the denigration of Sikh religious ethos by Nirankaris. The jatha of peaceful Sikhs was without firearms, carrying traditional Kirpans and they were shot at near the venue. The question of Bhai Fauja Singh reaching inside the pandal and attempting to kill the heretical cult-head just doesn’t arise.

The “highly-acclaimed” officer has failed to get his facts right, which are classic examples of his working style. Apart from many other gaps, Gill harps on the longest permanent presence of Council of Khalistan in Pakistan represented by Balbir Singh Sandhu -the secretary general of the organization. Sandhu expired 12 years back in 2005 after a brief illness. According to Gill, Jagtar Singh Tara, the assassin of Punjab CM Beant Singh lives in Lahore whereas the fact is that Punjab Police arrested him from Thailand in June 2015 and brought him back. He is lodged in Chandigarh jail since the last twenty-two months. All this shows is that his publication is without ground work, verification and historical correctness.

Not known for being truthful, Gill in his detailed account of Punjab’s militancy era has indulged in massive self-praise and patted his own back. Mirroring the New Delhi mindset whom he represented fully as the “Subedar of India” in Punjab, he viewed and handled the Punjab problem as a law and order problem. For him, like for the government of India, Sikh aspirations never existed, nor do they exist even now.

Harping on the same old theory based on hearsay, Gill like many other contemporary writers and columnists has linked Sant Jarnail Singh Bhindrawale’s emergence on the political canvass of Punjab as a Congress mischief, merely aimed at undermining the political base of Akali Dal. A lead story by seasoned journalist and former Indian Express scribe Jagtar Singh on June 26, 1981 with the headline, “Maverick in quest of martyrdom” belies all such vague accusations and suspicion about pro-Panthic credentials of the Sant. It’s very much clear that anyone who is willing to die for a just cause and ready for martyrdom cannot be a plant of someone else. Sant attained martyrdom in the true spirit of Sikh tradition.

If one admits Gill’s version that a large section of people of the state were affected by violence carried out by militant groups, his writing is silent about State terrorism unleashed by the Punjab police under his jackboots with full support of the Union government.

Throughout his writing, Gill refuses to recognize the indigenous character of the Sikh struggle. As a master manipulator, Gill twisted the genesis of the conflict to portray Sikh freedom-fighters as “mindless persons acting on behalf of Pakistan and its Inter-Service Intelligence (ISI)”.

While Gill takes sadistic pleasure in tarnishing the ethics of militants, he remains silent on his openly known love for wine and women, sometimes even in full public view. Like all his allegations without authenticity and genuine proof, he blames the militants, without being specific, of rape in the households that sheltered them. There is no denial that during revolutionary struggles, people with personal weaknesses tend to creep in. At the same time, the dirty tricks department of the police too sponsored criminal elements, renegades and police vigilantes to carry out such acts to defame the movement.

Toeing New Delhi’s line Gill never ever accepted that the Punjab problem required a political resolution. Gill has totally ignored how Punjab was robbed of its river waters, territory, legitimate rights including right to self-determination. He reduces the cases of excesses to a personal level by saying that there were some stray incidents of violations by individual cops and that courts have punished them. He even termed the abduction and subsequent elimination of well-known rights activist Jaswant Singh Khalra as one of the limited and individual irregularities that occurred. In his eyes, all hue and cry by victims for justice and advocacy groups is mere propaganda.

Not in a mood to accept the blame for human rights violations by the Punjab police, Gill took refuge in divergence of numbers cited by different Sikh groups. He cited the variations of the numbers by advocacy groups from 20000 to 50000 Sikhs killed during the course of the struggle to give clean chit to his force. Admittedly numbers of victims of state terrorism may be wrong, perhaps even exaggerated but the fact is that under Gill, the right to life in Punjab was virtually suspended and the immunity given to the police resulted in gross human rights abuse from torture to extrajudicial killings. Numbers are important but the life of even individual is more important than any of the misguided logic of Gill put together.

Strongly contesting and challenging Gill’s portrayal of Khalistani ideology and vision, as the Talibanized version of Sikhism, I must categorically say that the struggle for freedom of Punjab is fulfillment of a quest for Sikh sovereignty. Historically, it is the culmination of regaining Sikh self-rule lost in 1849. Like many writers of the past, the author has also failed to see and understand this historical perspective.

Surprisingly Gill says that 65 percent of all civilian victims killed by militants were Sikhs. By saying so, he himself questions the notion of the Sikh struggle being anti-Hindu. Admittedly, loss of innocent lives, irrespective of one’s religion, during the course of Sikh struggle is regrettable. If one has to leave Punjab just because he was not a Sikh, I feel sorry for that.

Moved by the sufferings of victim families of fake encounters and enforced disappearance and their long unending wait for their loved ones, I can say that the shrieks of sisters and mothers whose brothers and sons were killed extra-judicially on the orders of Gill, will continue to haunt him and them.

Co-author Sadhavi Khosla has written the major portion of the book. However, I haven’t touched the portion penned by her in my commentary except the section wherein she justifies the assault on Darbar Sahib, militarily called Operation Bluestar to prevent the formation of Khalistan. Her version stems from her lack of knowledge, insensitivity towards Sikh faith and a pathetically narrow approach. She has perceived the genesis of Punjab conflict through the prism of KPS Gill.

The authors of the book have looked for enemies within the state of Punjab and miserably failed to identify enemies of Punjab and Sikhs in the neighbouring states and the enemies amongst the minions of the Indian state who are still playing ping-pong with Punjab -both on rights issues and the drug abuse problem.

*Kanwar Pal Singh is spokesperson of the Dal Khalsa. He may be reached at: dalkhalsamail (at) gmail (dot) com