Leicester, England: The Sikh Council UK said in a statement issued on Sunday (Oct. 22) that England’s Labour party leader Jeremy Corbyn has re-affirmed his personal commitment to the manifesto commitments made by the party on Sikh issues before the election.

In a letter to Sikh Council UK members ahead of the Sikh Council UK General Assembly at Guru Tegh Bahadur Gurdwara Leicester yesterday (Saturday, Oct. 21) Jeremy Corbyn said he remained committed to implementing the pledges in government in respect of addressing longstanding concerns regarding the wearing of Sikh articles of faith in this country and to establishing an independent inquiry to review the role of the British Government in the 1984 Darbar Sahib attack. 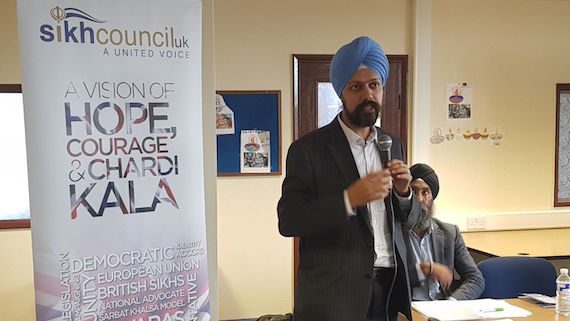 “Whilst wishing members a successful and productive General Assembly Jeremy Corbyn acknowledged the work of Sikh Council UK and others who have campaigned for more Sikhs in Parliament and expressed his pride at seeing history being made with Tanmanjeet Singh Dhesi and Preet Kaur Gill being elected as the first turban wearing Sikh and first female Sikh MPs respectively. He acknowledged that there was more to do and confirmed his commitment to making Parliament and all parts of public life more diverse”, reads the statement issued by the Sikh Council UK. 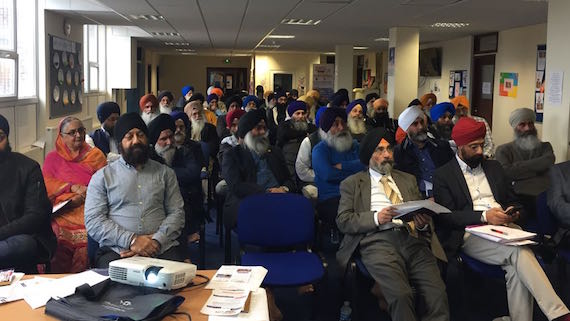 The General Assembly also received a letter from Lord Bourne the Minister of Faith and Integration at the Department for Communities and Local Government. Lord Bourne also acknowledged the work being undertaken by Sikh Council UK for increased Sikh participation in public life and expressed the need to do more in seeking a Parliament and Government which reflects the society they serve. He referred to the Race Disparity Audit which he hoped would inform the Sikh Council UK in its work. He paid tribute to Gurmel Singh and offered his congratulations from everyone at the Department for Communities and Local Government to Jagtar Singh as the incoming Secretary General of Sikh Council UK and said he looked forward to working with him going forward.

This was the first Sikh Council UK General Assembly since the general election and was attended by over hundred delegates representing Gurdwaras and other Sikh organisations from all parts of the country. The General Assembly was delighted to receive special guest Tanmanjeet Singh Dhesi MP. He expressed his gratitude to Sikh Council UK members for their support in his campaign and for all the work undertaken to increase Sikh representation in Parliament without which he said his success would not have been possible. Tanmanjeet spoke of his Sikh background and roots and expressed his wish for Sikh Council UK to go from strength to strength in its vision of uniting the community. He provided details of his work priorities including establishing a permanent memorial in central London to highlight the Sikh contribution to the world wars.