Fatehgarh Sahib, Punjab: Representatives of hardliner Sikh groups will walk down to residence of chief minister of Punjab for court arrest on May 15 protesting against governments failure to address the lingering issue of release of Sikh prisoners who have completed their jail terms. 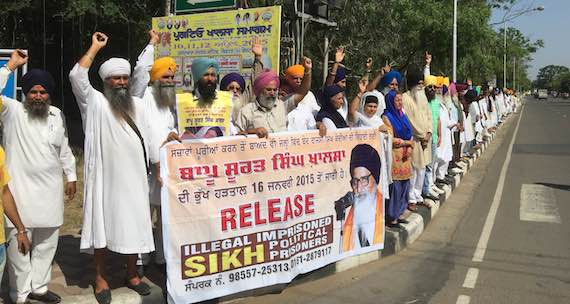 He said the CRPP took this decision to voluntarily offer for arrest after all their appeals to Union as well as state governments has fell on deaf ears. He said Akali veteran Bapu Surat Singh who is on fast unto death since Jan 16 was determined to die for the cause”.

Dal Khalsa secretary Dr Manjinder Singh reiterated that Bapu Surat Singh is fighting for the freedom of Sikh prisoners who have not been released, despite serving the minimum terms of their sentence.

This struggle by Surat Singh is a continuation of what Gurbakash Singh left half-way that too abruptly, he said and added that this hunger strike by Surat Singh has once again brings attention to the fates of Sikh prisoners who are discriminated, and unlike other Indian prisoners have not had their sentences shortened. Fully supporting the cause of Bapu Surat Singh in his struggle for justice and equality to Sikh prisoners, he called upon all organisations, human rights and civil liberties groups to join the protest.