Kultar’s Mime, a dramatised long poem, not only depicts the painful aftermath of the 1984 Sikh carnage, but also brings to the fore the actual facts of the event. The piece, written by Sarbpreet Singh, is immersive theatre combining painting, poetry and music to tell the stories of children who survived the carnage in Delhi, which is said to have occurred in retaliation to Indira Gandhi’s assassination.

In 1984, Sarbpreet was a student at BITS Pilani. “Nothing much happened there. It was by-and-large peaceful and I wasn’t very affected by the 1984 carnage. But it was when I went to the US, three years later, as a student that I read the People’s Union for Democratic Rights and People’s Union for Civil Liberties report titled Who Are the Guilty. It is a credible and unbiased report. It is written in clearly graphic details, exposing the lie that what happened was a riot. It was actually planned out genocide, which was not reflected in mainstream media because there was self-censorship and government control at the time. I also read Madhu Kishwar’s article Gangster Rule that appeared in Manushi. She wrote exactly the same thing as what was written in the report, it was an unbiased account. I then read an academic paper titled Stories of Children by anthropologist Veena Das.” 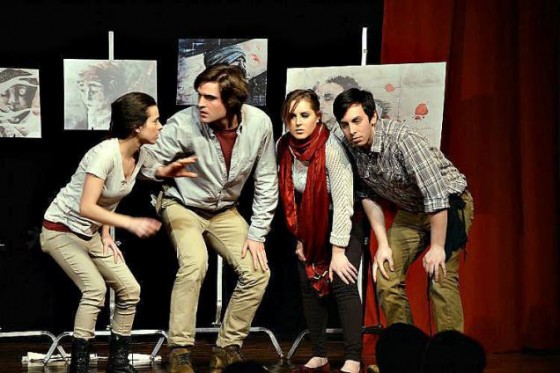 A still from Kultar’s Mime play

While the first two sources gave factual information, Veena Das’ paper, documented the stories of young Sikh children who had survived the massacre and were relocated to Tilak Vihar, Delhi. “A couple of the stories struck a chord. One story was of a deaf and mute boy and another was of a young girl, who both witnessed their fathers being killed. I fictionalised the stories of the boy and girl and added more stories.”

The poem was written by Sarbpreet 25 years ago, but the idea of dramatising it occurred to his daughter, Mehr Kaur, who studies theatre at Smith College. Turning the poem into the play was an intense process. “She made it into a play within a play,” says Sarbpreet. The father-daughter duo found striking similarities between Kultar’s Mime and Haim Nahman Bialik’s poem In The City of Slaughter, which is about a massacre of Jews in Kishinev, then in Russia, in 1903, which is tied within the narrative. “The play is set in New York. A group of young Jewish artists decide to commemorate the Kishinev Pogrom by organising an art exhibition, in which they display paintings about the pogrom, simultaneously reading a poem. As they read Bialik’s poem, they honour the pain of the Kishinev victims by focusing on the massacre of 1984 in Delhi, and make it the subject of the exhibition,” explains Sarbpreet.

“The paintings were commissioned by Mehr. She contacted an artist Evanleigh Davis, a student at Smith College.” The focus of the play is not to create excitement or look for revenge, says Sarbpreet. “To some extent, we are restarting a conversation. No matter who we are, at the end of the day, pain is pain. It is not okay to target people because of who they are and what they believe in. Art can’t bring about justice. But what it does is to make sure we never forget these things. We need to recognise we have these ugly incidents in history. In one of our performances in a film school abroad, there were white professors who knew nothing about the Sikh massacre, but they cried during the performances. At the end of the day, human suffering is a universal problem. There is an immediate outpouring of human compassion when people watch the play. It gives me hope. Because just as human beings are capable of evil, they are also capable of great good,” concludes Sarbpreet.

The cast features young American actors from Boston and was launched in 2013, but was revived in 2014 in association with The Sikh Research Institute and premiered in Harvard University. The play has travelled to four countries. It will be staged in the city, at Jagriti Theatre, Whitefield, at 8 p.m. Tickets are available on bookmyshow.com and at the venue.