Like Badals, Captain Amarinder Singh Too Has Stakes in Illegal Mining: AAP

Roopnagar: The Aam Aadmi Party on Monday (June 25) staged a dharna in front of the district complex, Roopnagar against the attack on local AAP MLA, Amarjeet Singh Sandhoa. The party demanded a CBI inquiry in the cases of illegal mining throughout state.

Addressing the workers from all over Punjab, AAP state co-president Dr. Balbir Singh alleged that Capt. Amarinder Singh is hand in glove with the mining mafia operating in state and he too have stakes in the this illegal business like Badals. He said that just because of the involvement of Capt. and other Congress leaders, the state govt. is planning to give clean chit to the people of mining mafia who attacked MLA Amarjeet Singh Sandhoa. 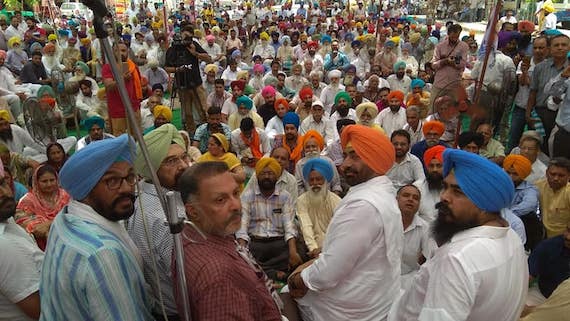 Aam Aadmi Party on Monday (June 25) staged a dharna in front of the district complex, Roopnagar against the attack on local AAP MLA, Amarjeet Singh Sandhoa.

The leader of opposition, Sukhpal Singh Khaira alleged that Capt. and his coterie has surpassed the ‘records of misrule’ set up by the Badals during previous govt. and people of Punjab are in the state of shock due to daily happenings. He said that during the previous govt. ministers like Sikander Singh Maluke used to slap those who demanded their right and the present govt. following the footsteps of Badals are shielding the culprits responsible for attacking the elected representative of people.

Criticizing the Punjab Police Chief and some senior police officers, Sukhpal Singh Khaira said that due to their inefficiency the moral of force has been shattered and lower rank police employees are in “state of terror”. Quoting the incident of Ferozepur where he went in support of a family whose land was grabbed by Congress leaders and was himself attacked by the Congress goons. Unfortunately, the police employee who came in defense of Lop was transferred to the police lines for stopping Congress workers to attack Sukhpal Singh Khaira. He said that the recent sting of Khamano tehsildar explains how Congress MLAs are pressurizing officers to adopt corrupt practices and give them their money on weekly or monthly basis. He dared Capt. Amarinder to again swear and tell people what efforts did his govt. made to tame drug abuse, illegal mining and suicide of farmers-laborers in state and should release a white paper of the outcome.

Khaira said that the govt. is trying to shield the mining mafia in the state. He dared that he along with MLA Amarjeet Sandhoa and other MLAs will visit the same mine and show the people and govt. the operations of illegal mining mafia. He criticized former minister Dr. Daljeet Cheema for his baseless allegations against MLA Amarjeet Sandhoa.

Addressing the gathering, MLA Amarjeet Singh Sandhoa said that he will continue to fight against illegal mining mafia and perform his duty with utmost dedication. He demanded CBI inquiry in the case of mining mafia attack on him and his colleagues.