Lok Sabha Polls: AAP Announces Candidates for 6 Out of 7 Seats in Delhi; No Alliance with Congress

New Delhi: Accusing the Congress for the breakdown of coalition talks between the two parties, the Aam Aadmi Party today announced names of the candidates for six of the seven seats in Delhi for the upcoming Lok Sabha polls.

Delhi has seven Parliamentary seats, all of which were bagged by the BJP in the 2014 polls. AAP hasn’t announced any name for the West Delhi seat so far. 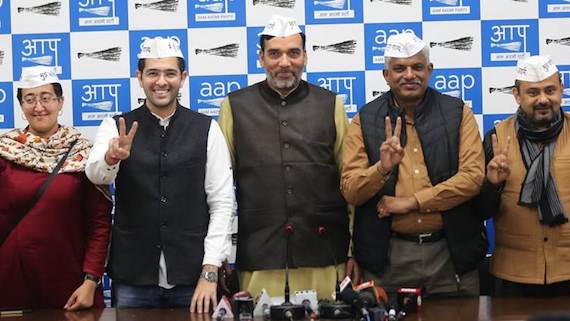 Lok Sabha Polls 2019: AAP Announces Candidates for 6 Out of 7 Seats in Delhi

AAP Delhi convenor Gopal Rai alleged that the party’s hand was forced by the Congress’ categorical stand that its Delhi unit was completely against any tie up.

Rai claimed that on February 13, Congress President Rahul Gandhi had conveyed to Delhi Chief Minister Arvind Kejriwal that a Coalition wouldn’t take shape in Delhi due to the reluctance of the Delhi Pradesh Congress Committee leaders.

“He (Rahul) said so in front of all the Opposition leaders at Sharad Pawar’s residence,” Rai said.

Arvind Kejriwal has been saying that AAP was tired of trying to convince the Congress for an alliance to ensure that anti-BJP votes do not get split, thereby benefiting the ruling party at the Centre.

“Moreover, DPCC chief Sheila Dikshit made it clear on Friday that she was not in favour of any alliance. Time was running out and we had to announce names,” Rai said.