Romford, UK: Sarah Leung, deputy headteacher of Squirrels Heath Infant School, Salisbury Road, Gidea Park, was “delighted” when she saw the tribute for the first time to pupil Milan Lall, a seven-year-old boy who died of leukaemia in June.

“You can see so much work went into creating the bench with all of the detail. We’re very happy that we have got something to remember him as he was so lovely.”

A super heroes day was held at the school where pupils and staff got to dress up as their favourite characters and raised more than £1,000 which paid for the tribute to Milan.

The bench which also features Spiderman and a samurai sword, was created by carpenter Andy O’Neill from Wild Wood Carving in Bristol. 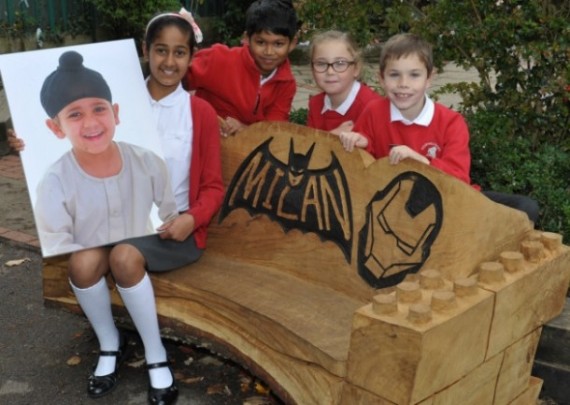 Maya Lall with photo of her brother Milan, and other pupils on the bench. Courtesy: Romford Recorder

When he was told about Milan’s story who battled leukaemia for several years, Andy couldn’t wait to get started on making the bench, with the end result completed in three days.

He said: “It is a really really sad story but memorial benches are special jobs because they do mean so much to the family and you get to put someone’s spirit into what you create.

“I am very proud of the bench and just hope that the family like it and think it is a good tribute to Milan.”

The memorial has been placed in the school’s playground where pupils can go and visit.

Sarah said: “Milan’s friends from his class have moved on to junior school so the pupils here now didn’t know him but because the bench is here, they all ask about him. We never want to forget Milan and this tribute keeps his presence alive in the school.”