Chandigarh: Days after a Chandarlok colony (Subhash Nagar, Ludhiana) resident Kuldeep Singh alias Rimpy was arrested by Ludhiana labelling him as ‘Babbar Khalsa International’ militant the locality residents are still in shock. A report in Hindustan Times (HT) notes that [w]hile his family members have left after locking the house, local residents say that they have always known Kuldeep as a gentle person and never fought with anyone.

A neighbour, on the condition of anonymity, said, “He may have been falsely implicated. He never even indulged in arguments with anyone in all these years”, notes HT. 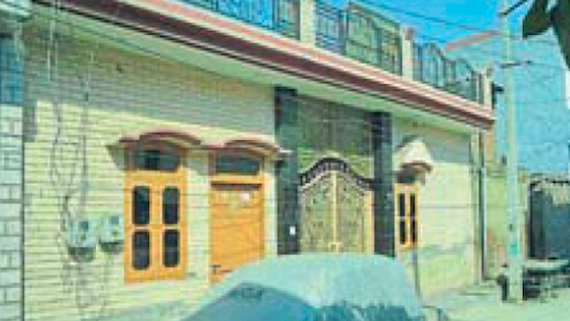 The house of Kuldeep Singh alias Rimpy at Subhash Nagar in Ludhiana on Sunday | Source: HT

Kuldeep Singh, who owns a transport company, had been living in Chandarlok colony of Subhash Nagar for the past 20 years. While his mother, wife, daughter and brother stayed with him, his father used to live in another house close by. But ever since his arrest, the family members are nowhere to be seen even though their car is still parked outside the house.

Neighbours suspect they may left for somewhere without informing anyone.

According to Hindustan Times (HT), [o]n Friday, when the police turned up at Kuldeep Singh’s house, the neighbours thought that one of his drivers may have caused an accident. They came to know about the actual matter when one of the neighbours had gone to the court complex on Saturday for some work.

“I saw Kuldeep in police custody and was shocked to know that he was arrested for his connection with Babbar Khalsa International,” the neighbour reportedly told HT, requesting anonymity.

The Ludhiana police said on Monday (Oct. 2) that it has made 4 more arrests as a followup of 7 arrests on Saturday (Sept. 30).

The police have alleged that the arrested persons were conspiring to kill people who write against Sikhism and Khalistan on social media.

The police claims that it found during investigations that the minor, who was arrested along with 6 others on Saturday (Setp. 30), had turned an “Amritdhari” recently.

“A resident of Sekha Kalan village of Moga, the minor is a student and was very active on social media”, notes a report in HT.

Advocate Jaspal Singh Manjhpur, who deals with the cases of Sikh political prisoners has questioned intentions of the police behind propagation of certain facts.

“By propagating specific facts, such as a Sikh teenager having become Amritdhari the police wishes to trigger specific sentiments against those follow the Sikh way of life”, said Advocate Jaspal Singh Manjhpur, while talking to the Sikh Siyasat News (SSN).

“How this fact becomes relevant to the allegations levelled by the police against arrested persons, in wake of the fact that hundreds of Sikhs become Amritdhari during Amrit-Sanchar in Punjab, almost on daily basis?”, he questioned.

Indian Army did the same in the aftermath of June 1984 attack on Darbar Sahib when its mouth piece Baat Cheet had termed Amritdhari Sikhs as dangerous persons during its covert attack on Sikhs which was code-named as “operation wood-rose”. Now police seems to be working on the same lines, he added.

Advocate Jaspal Singh Manjhpur said that such statement by the police pose question over activities of Taksals, Pracharaks and other Sikh groups and institutions and they must take a strong notice of it.