Harpal Singh Cheema, in the memorandum submitted to the governor, said that the multi-crore Grand Manor Homes scam, involving Punjab Civil Supplies Minister Bharat Bhushan Ashu and other big wigs of the government had been hitting the newspapers headlines these days.

The issue, he further added, had been raised on the floor of the House during the recently-concluded Budget session of Punjab Vidhan Sabha. 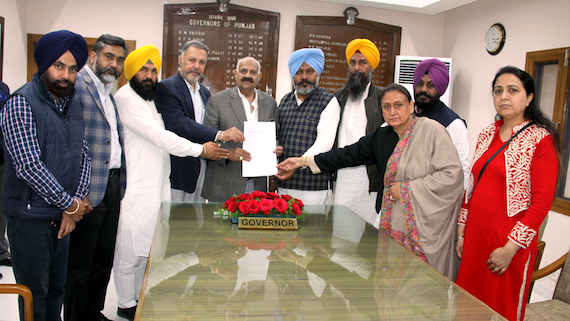 He said that in the inquiry report names of Bharat Bhushan Ashu and Atamnagar (Ludhiana) Congress leader Kamaljit Singh Karwal and three other government top officials. He lamented that no action had been initiated against the accused so for.

The delegation, through the memorandum, has demanded that the Chief Minister Captain Amarinder Singh should make public the inquiry report, conducted by the Local Bodies Minister, Navjot Singh Sidhu, a part of which had hit the newspaper headlines, he said.

The report, AAP claimed, could not be refuted by the minister, who had instead, while answering a media query, asserted that action would be taken against the guilty howsoever high and mighty he might be.

Harpal Singh Cheema said that the government was dilly dallying on initiating any action against those named in the report, which raised valid questions of propriety. “What was the government waiting for even when the audio clips wherein the minister was seen threatening the investigating officers and casting aspersions against the Punjab and Haryana High Court had gone viral?”, he asked.

AAP leader alleged that the powerful land mafia was enjoying political patronage in the state and was involved in running the nefarious trade without the scantest fear of the law of the land. Expressing his fears, Cheema said that by not showing land mafia the doors potential would endanger lives of the investigating officers and their families.