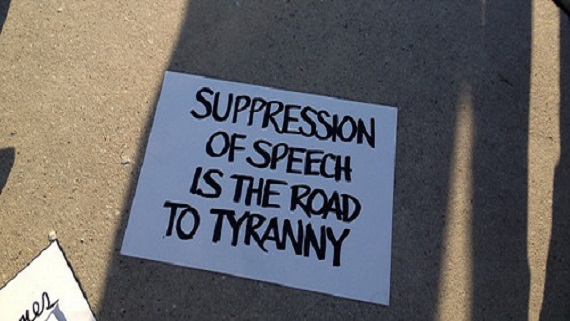 “The poster the police say those arrested were carrying did not constitute incitement to hostility, discrimination or violence, so these arrests are unwarranted.

The police’s initial invocation of the sedition law, which was later dropped, shows how this colonial-era law is still being used to curb the right to freedom of expression.

Various state governments continue to use overly broad ‘hate speech’ laws to restrict free speech. The Madhya Pradesh police must drop all criminal charges and release those who have been arrested.”

According to media reports, 11 people were arrested on 3 December, of whom six were later released on bail.  They were arrested for offences including Section 153A of the Indian Penal Code, which criminalizes expression that “promotes or attempts to promote… disharmony or feelings of enmity, hatred or ill-will between different reli­gious, racial, language or regional groups or castes or communi­ties.”

While governments have an obligation to prohibit advocacy of hatred constituting incitement, Section 153A is one of several ‘hate speech’ laws in India which place overly broad restrictions on expression that are not aligned with international human rights standards on freedom of expression.

Indian courts have ruled that freedom of expression can be restricted on grounds of public order only when it involves incitement to imminent violence or disorder. In 2015, the Indian Supreme Court struck down section 66A of the Information Technology Act, a provision which placed vague and overbroad restrictions on online expression, observing: “Mere discussion or even advocacy of a particular cause howsoever unpopular is at the heart of [the right to freedom of expression]”. The Court stated that such advocacy could be restricted only when it “reaches the level of incitement”.

According to the Indian Express newspaper, the text of the poster that was displayed, read in Hindi: “Hamare azm ko hamare gaddar jaan jayenge, agar itihas pad lenge to pehchan payenge, yeh Hindustan mere khwaja ka tha, aur rahega galat fehmi me mat rahna, ki Ram rajya layenge.” (Our traitors will know of our intentions. If they read history they will recognize, that India was my saint’s and will be, do not be under the false impression that they will bring Ram Rajya.)