Mukatsar, Punjab: Political parties blow election horns during annual Maghi Jor-Mela at Mukatsar Sahib today. It appeared as if the religious event, held at a historic location, was hijacked by the politicians in order to convince the crowd to vote for their respective parties.

The AAP conference at Maghi reportedly attracted huge crowd. Kejriwal, who was wearing a yellow turban, criticised both ruling Badal-BJP combine and opposition Congress party while maintaining sure election victory of the Aam Aadmi Party. 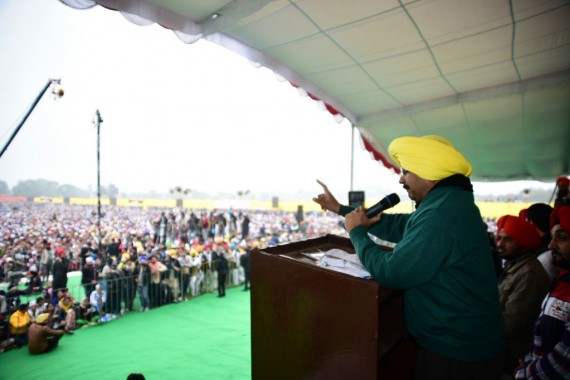 Launching an attack on Badals, Arvind Kejriwal asked that when whole of the Punjab was blaming Bikram Majithia for the drug menace in Punjab why Badals were not taking any action against him? He said that only the Aam Aadmi can send Majithia to jail.

Criticising the Congress party the AAP’s central convenor said that Capt. Amarinder Singh was facing charges for corruption for more than a decade.

He said that Shri Guru Granth Sahib was not just sacred for the Sikhs but the people of other religions also respect Guru Granth Sahib and consider it sacred. He said that he was deeply hurt by the beadbi incidents. “I will make sure the moment I win, I will put all the culprits behind bars”, a Tweet by Hindustan Times (@HTPunjab) quotes Arvind Kejriwal.

He said that he has heard about the cancer train that goes from Bathinda to Bikaner in Rajasthan but the Badal government has failed to set-up a cancer hospital in Punjab.

Delhi CM maintained that he has ensure that not a single farmer commits suicide in Delhi while adding that if voted to power in 2017 the Aam Aadmi Party will work in this direction in Punjab.

He maintained that he was not scared of Badals.

He said that the Sikhi was about sacrificing everything for the sake of truth and justice. He alleged that the Badals were not Sikhs as they were sacrificing everything else to satisfy the lust of their family. Kejriwal also maintained that Bhagwant Mann, Sanjay Singh and Ashutosh were “true Sikhs” as they had “sacrificed” their professions to join politics to serve the country.

He said that the Aam Aadmi Party will secure a clean sweep in 2017 assembly polls in Punjab.