Man Assaulted, His House Burned Down After Dead Cow Was Found Outside His House In Jharkhand

Ranchi: In yet another incidence related to mob violence, Usman Ansari a native of Jharkhand was here on Tuesday beaten up and part of his house set on fire by a mob after a dead cow was reportedly found outside his house in a village under Deori police station area of Giridih district, said the media.

While referring to the Police inputs the media reports indicates that the mob attacked the house of Usman Ansari at Beria Hatiatand village in Deori area, nearly 200 km from Ranchi, on Tuesday after some people spotted the carcass of a cow. 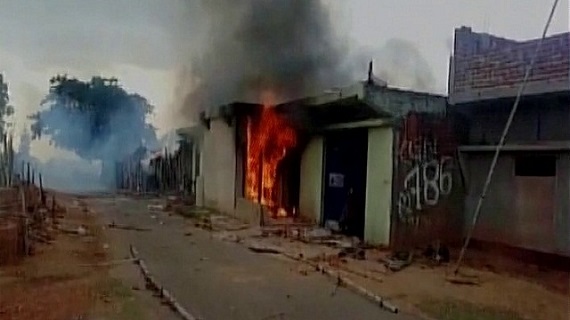 Blaze Raging from the house of victim Usman Ansari.(Express Photo)

Due to the dilly dally attitude on the part of police authorities the house of Usman Ansari could not be saved.

“Our men and officials braved the crowd and immediately rescued Ansari and his family members. When the police tried to take him to hospital, there was resistance from the crowd. There was heavy stone-pelting. We had to open fire in the air,” reads the statement of Jharkhand police spokesman R K Mullik.

It is learned that one person named Krishna Pandit, sustained injuries when the police fired several rounds of ammunition in the air to disperse the rowdy mob, About 50 policemen were reportedly injured in the stone-pelting.

Both Ansari and Pandit are reported to be in a stable condition and have been shifted to a hospital in Dhanbad for better medical care, notes Indian Express (IE).

“The mob was highly charged and nearly 50 of our men sustained injuries in the stone-pelting. The situation has been brought under control,”adds R K Mullik to his statement.